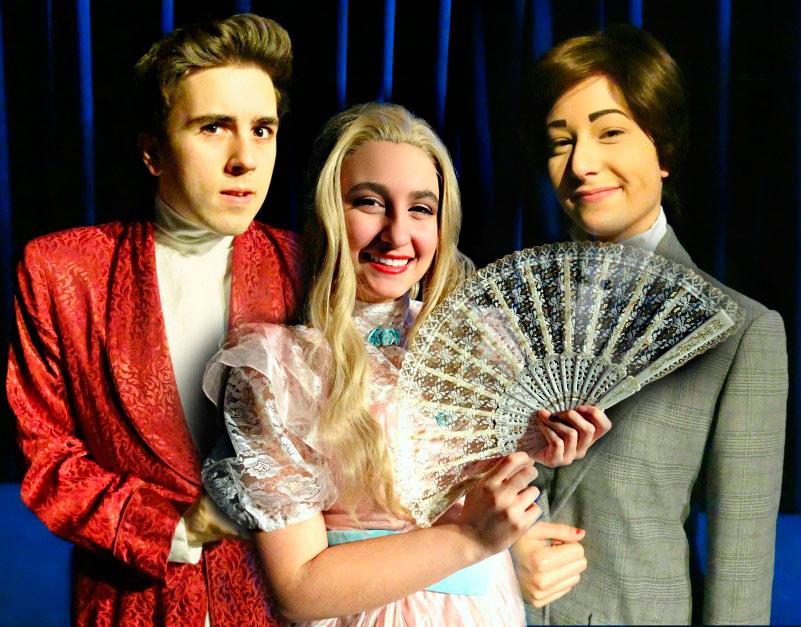 The Mystery of Edwin Drood opened to an audience of 158 people last Friday, March 24.  The musical, based on an unfinished novel by Charles Dickens, allows the audience to choose major plot points toward its conclusion.  The musical follows a troupe of Victorian actors as they perform their opening night of The Mystery of Edwin Drood.  The character of John Jasper, played by Garrett Meyer ’18, is madly obsessed with the beautiful Miss Rosa Bud, played by Emma Saltsman ’20.  Rosa Bud is engaged to Edwin Drood, played by Steph Conti ’18.  Edwin mysteriously disappears on Christmas Eve, leaving the cast and audience to determine if he has been murdered, and if so, by whom.

Along the way we meet prostitute and opium den manager, Princess Puffer, played by Rose Garron ’17, and Helena and Neville Landless, played by Alyssa Peterson ’19 and Brendan Mahoney ’18.  The story is narrated and by the Chairman, played by the talented Mark Kelly ’17.  The chairman regularly interacts with the audience, engaging them in the voting process when the audience chooses who murdered Edwin Drood and who the two lovers are.

Unlike Dickens’ novel, The Mystery of Edwin Drood is lighthearted and hilarious.  No one ending will be just the same as a previous ending, inviting audience members to return and see what other tricks the cast may have up their sleeves.

As Dr. Magnuson, advisor to the Anselmian Abbey Players notes, “We hope that the very positive responses we have heard from those in attendance the first weekend can help push the final two performances to even higher numbers.  This is such a unique show to rehearse and prepare, but there is an energy at the end of the performances when the audience votes that I have rarely experienced in the theater!”

Dr. Magnuson said he had received various emails praising the performances: “It was terrific—fun, inventive, skillful, difficult, and a little weird—just the way I like my shows!” as one viewer described.  Others praised the Abbeys on their consistent excellence, while others noted the comedy of the show, calling it “a triumph of voice and spirit and comedy and a fun night out!”

She said, “The Mystery of Edwin Drood was a great, action-packed mystery in which every character is a suspect. The acting was superb and although it was a mystery, the actors made it quite funny as well.”

Materazzo continued, “It was very interesting that the audience was able to take part, voting on the ending of the musical. Because of this, each production could potentially have a different ending! The entire experience was fascinating and fun.”

The final performances of The Mystery of Edwin Drood will be this Friday, March 31 and Saturday April 1, both at 7:30 p.m.  Tickets are $6 for students, with a Dana Center fee of $1.  The cast encourages you to help solve the mystery!