The Saint Anselm College community will be saying farewell to its President Dr. Stephen DiSalvo in June. DiSalvo will be leaving the Hilltop to begin his work as the president of Endicott College in Beverly, Massachusetts.

DiSalvo is the first layperson to ever become the president of Saint Anselm College. In his seven years of service, he has greatly expanded Saint Anselm’s prominence in New England. He leaves behind a legacy of modernization.

Ann Cantino, Saint Anselm’s Chair of the Board of Trustees, has called DiSalvo’s tenure “remarkable” at ensuring the well-being of the college moving forward into the future.

In his first year at Saint Anselm College, he was involved in several campus-changing decisions. These changes included the addition of the 100,000 square-foot Lower Quad by Davison Hall, which had originally been a parking lot. This space now hosts many student events, from orientation to end of classes celebrations.

During this 2013 period, the first layouts had begun for the 43,000- square foot Living Learning Commons, which was completed in time for the 2014 academic school year, housing over 150 students. It additionally boasts a classroom and an art studio.

In administrative accomplishments, DiSalvo also separated the positions of Vice President for Academic Affairs and Dean of the College for the first time in Saint Anselm history when he elected Vice President Brother Isaac Murphy and Dean Dr. Mark Cronin. This is the first time in the college’s history that the positions of VP for Academic Affairs and Dean of the College have been separated. DiSalvo also selected Daron Montgomery as the Hawks’ new Athletic Director on December 21, 2015. A couple years later, he appointed Dr. Ande Diaz as Saint Anselm College’s first Chief Diversity Officer.

Under DiSalvo’s administration, the college had other developments. The study abroad program in Orvieto, Italy, was expanded to accommodate more students.

A statue of the Virgin Mary was erected in the new Sullivan Memorial Grotto due to a generous donation from John N. Sullivan. In 2015, DiSalvo revealed to the Anselmian community that Dr. and Mrs. Paul J. McNeil, Saint Anselm College alumni from the Class of 1946, had generously donated to the College to allow for new construction on the entrances. The new entrance was named “Dr. Paul J. McNeil ’46 College Entrance” in their honor. Moving forward, the President budgeted a 15 million dollar investment on the renovation of the Cushing Student Center. In the spring of 2018, it was completed and renamed as the Roger and Francine Jean Student Center Complex.

These developments had a rippling effect. In the 2016 Wall Street Journal article on the higher education rankings, Saint Anselm College was ranked 235 out of 1,000 colleges and universities, tying with Providence College. This ranking was based on a variety of factors, such as environment, resources and engagement. Saint Anselm ranked 24.8 out of 40 for outcomes, 17.2 out of 30 for resources, 15.2 out of 10 for environment; leaving Saint Anselm with a total score of 58.7 out of 100 for overall score.

This summer, DiSalvo will be stepping into the shoes left by former Endicott College president Richard “Doc” Wylie, who passed away last year. Considering that Wyliehad served Endicott since 1987, expanded the former women’s college into a coeducational one, and opened up a doctoral program, being chosen as his successor is certainly an honor for the Anselmian president.

At Endicott, DiSalvo aims to expand student recruitment efforts, increase campus diversity, and double the college’s $92 million endowment, according toan interview published by The Boston Globe. These areas were ones which DiSalvo had great success in developing here in Manchester, NH.

According to an email sent by the DiSalvo, he is looking forward to his new life at Endicott.

He does write of himself and his wife Eileen, “will always treasure [their] years on the Hilltop…[and wish] the entire Anselmian community the very best as we conclude the academic year together.”
While many will be sad to see President DiSalvo go, it can be assured that he has left behind a formidable legacy at Saint Anselm College. 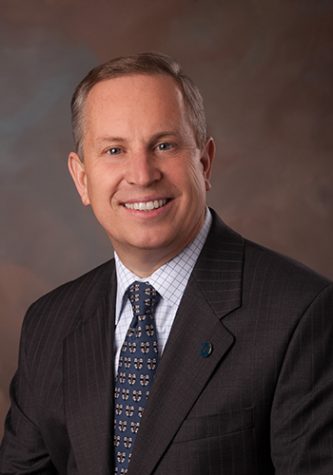