The weather, as Professor Bouchard described it, embodied the soul of London on Tuesday, April 23. Gray skies, a tad chill to the air, and a looming threat of rain accompanied Saint Anselm’s annual celebration of William Shakespeare’s 455th birthday.

Students, faculty, and alumni gathered behind Alumni Hall to read all of Shakespeare’s 154 sonnets. The tradition began exactly 31 years ago on Monday, April 25. Professor Bouchard and about 75 others took part in reading his sonnets word for word until they were complete.

Since then, the celebration has been taken to higher levels. Performances from the Abbey Players, banners and signs, and even birthday cake have made their way to the party. Professor Bouchard became the founder and director of the future Sonnet Readings.

Now anyone can sign up to read a sonnet or preform a scene from one of Shakespeare’s plays. Those who sign up get assigned a sonnet and are given a button, designed by Saint Anselm students and alumni. This year’s button was designed by alumni Lauren Miller (’15).

The Abbey Players performed three different scenes from Shakespeare’s plays throughout the day. The first performance was Hamlet Act I, Scene 5, and was directed by Madison Mckeon (’21). A humorous showing of A Midsummer Night’s Dream Act V, Scene 1 was directed by Dawson Ellis. To wrap up the theatrical productions, Tristan Longley (‘19) directed a performance of Coriolanus Act III, Scene 2. These showings were met with great applause and lots more cake.

Not only was the Saint Anselm community ready to celebrate the great playwright and poet, but the Recycled Shakespeare Company made a visit from Fairfield, Maine. The visitors were dressed in their 16th century garb and came ready to read sonnets. There was even a surprise performance from Ms. Alli MacDonald, who sang a song about spring from As You Like It.

Listeners got to listen to a few readers perform their sonnets in languages other than English, such as Norwegian, Czech, and Spanish. Professor Spitzer recited sonnet 18 in Russian, and Professor Thenin did the same poem in French. Saint Anselm’s own Ha Vu (’21) recited sonnet 125 in Vietnamese.

The 31st Shakespeare Sonnet Reading was a success once again. The tradition of honoring one of the greatest writers in the English language is still alive and strong. If you missed your chance to read a sonnet this year, look out for emails from the English Department to sign up to read or preform when Saint Anselm celebrates Shakespeare’s 456th birthday next year. 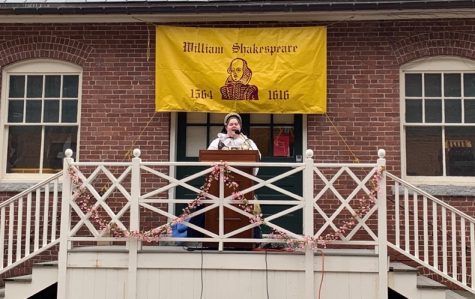 Stephanie CantoAlli MacDonald from the Recycled Shakespeare Company singing “It was a Lover and his Lass” from the play As You Like It.