Spring Break in The Netherlands 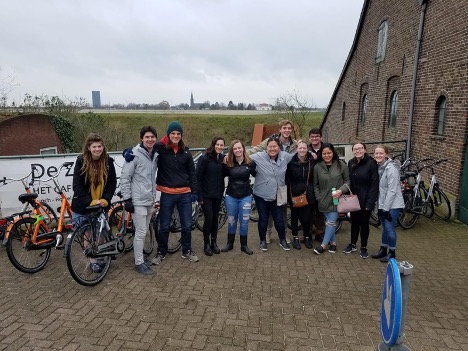 Over spring break, a group of Saint Anselm students ventured to the Netherlands. Headed by Professors Anderson and Tepley and sponsored by the Philosophy Department, the trip included many fun and enriching activities intended to give students a taste of Dutch culture.

Students departed from the Hilltop on Friday afternoon and headed to Boston Logan Airport. From there they flew to Dublin then to Amsterdam. Once in Amsterdam, students took a train to Nijmegen where they stayed for most of their time in the Netherlands. Upon arriving in Nijmegen, the students walked to Hostel Barbarossa, which was to be their home during their stay. Once situated in the hostel, students walked to a local bike shop which offered rental bikes to be used around the city as it is commonplace in the Netherlands to bike rather than drive.

The next morning, students went to a local hotel known as Hotel Credible, which offered a selection of Dutch breakfast cuisine. The Hotel was so popular that it remained the students’ official breakfast destination during their stay in Nijmegen. After, students rode to the local train station to depart to the city of Den Bosch. While in Den Bosch, students toured the Jheronimus Bosch Art Center, home to many high-quality reproductions of famous local painter Hieronymus Bosch’s medieval artwork. Students then took a guided tour of the city and saw many of its historical attractions and culture.

On Monday, students biked to Radboud University in Nijmegen where they experienced what it is like to be a student in the Netherlands. Students sat in on a philosophy lecture given by Professor Evert van der Zweerde. At lunch, the group ate with fellow Dutch students and discussed how Dutch college cuisine compared to Davison. Following lunch, the group was taken to the Radboud University Library to view the rare book collection, which included a variety of books on all different subjects — some thousands of years old!

On Tuesday, students returned to Radboud University to view its Anatomical Museum, which exhibited many different anatomical models of the human body, all of which were real. Students then attended a philosophy lecture given by Professor Paul Bakker. After a morning at Radboud, students biked to the Valkhof Museum in Nijmegen which featured a historical timeline of Nijmegen. That night, the group watched The Grand Budapest Hotel with fellow Dutch students and shared their different college experiences.

On Wednesday, the group took a trip to the German city of Cologne, home to the Cologne Cathedral which is the largest twin-spired cathedral in the world! While in Cologne, students tasted German delicacies such as traditional German meats, pastries, and Berliners—the doughnuts of course, not the people! There were many attractions students could visit such as the Museum of Chocolate which exhibited the origins and lineage of chocolate and showed how Lindt Chocolate is made. Other museums included the Fragrance Museum where different scents could be sampled, including the one Cologne is famous for—Cologne!

On Thursday, the group returned to Nijmegen to participate in a guided tour of the Radboud University campus led by one of the Dutch students. Following the tour, students biked to the Valkhof Museum to partake in a WWII themed escape room. Students were split into two groups with only one group making it to the end of the escape room. While one group was still in the escape room, the other enjoyed a Dutch delicacy known as Poffertjes or small pancakes drizzled with sweet toppings.

On Friday, the group left Nijmegen to visit Amsterdam where they spent the next two days at a hostel near Vondelpark in downtown Amsterdam. Students went on a guided canal tour through the city of Amsterdam and explored its many historical and cultural sights. On their last day in the Netherlands, the group participated in a guided tour of the Van Gough Museum, which exhibited many of his original works. Following their museum visit, students were free to explore Amsterdam and all of its history and culture. With that, the students were off on their return journey to the Hilltop. It was a great adventure and learning experience for all those involved!