The Saint Anselm Crier • May 6, 2021 • https://criernewsroom.com/culture/2021/05/06/a-personal-devotion-dr-christine-gustafsons-discussion-on-st-joseph/ 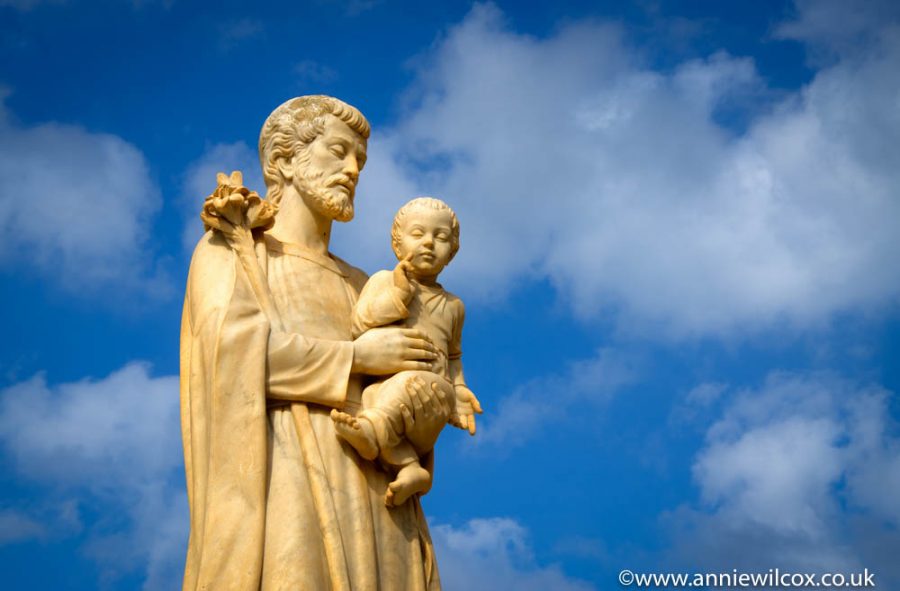 Picture: a statue of Saint Joseph with the child Jesus at Our Lady of Ta Pinu Basilica

On Sunday April 25th, Dr. Christine Gustafson talked to a small crowd in the Lower Church after the 7pm mass that night about St. Joseph, her personal devotion to him, and her experiences in her family with St. Joseph. The talk was sponsored by the Office of Campus Ministry.

Dean Gustafson started off the evening with a story about World War II and her family’s connection with the war, saying, “My grandmother had three brothers who were in the war. Two were in the Army in Europe, and one was in the Navy in the Pacific.”

Dean Gustafson’s brother, Irving, held on to a prayer of St. Joseph in his pocket throughout the entire war. The prayer was so protective for him that, at one point in the war, Irving’s ship was shot with a torpedo, and they survived. He received this prayer from a Marine that was picked up from Iwo Jima.

Irving made it home safe from the war, so her devotion to St. Joseph became a family legend. Five of Irvings’ siblings died, and the other five survived. Her grandmother’s brother was considered to be the “baby in the family.” Her family considered him to be the light of the family, or the, “sunshine of the family.”

At the time of the war, Dean Gustafson’s grandmother was pregnant with her mother, and Irving came home from the war in November of 1945. She said that Irving was her mother’s godfather, and, “this kind of devotion to St. Joseph permeated the family after that.”

Dean Gustsafson tried to do research on who sent the prayer of St. Joseph to Irving. At the time, Irving was aboard the USS Highlands, and she says, “it was a supply ship in the Pacific and made it to the end of the war. It was also a hospital so he must have met someone who was wounded and gave it to him to keep him safe.” She concluded the story by saying that, “it was the care of St. Joseph that kept him safe throughout the war.”

During the Q and A session, Dean Gustafson was asked, “ Does your family still pray this prayer and how does it impact your own life?” She stated that Saint Joseph, “is one of those saints that you say your prayers at night to and you just add him in.” The Novena to Saint Joseph continues to impact her family and is said every night in her family. “And he kept this prayer until the day he died. I guess it did change my family on the fact that he survived.”

St. Joseph is the patron saint of fathers and workers, and is the biological father of Christ. The Campus Ministry department held another event on Monday, May 3rd titled, “Saint Joseph and the Value of Work.” Campus Ministry hopes to continue to run programs going into the next school year on the topic of Saint Joseph.