The Saint Anselm Crier • May 6, 2022 • https://criernewsroom.com/culture/2022/05/06/yale-historian-examines-grace-free-will-debate-at-anselm-lecture/ 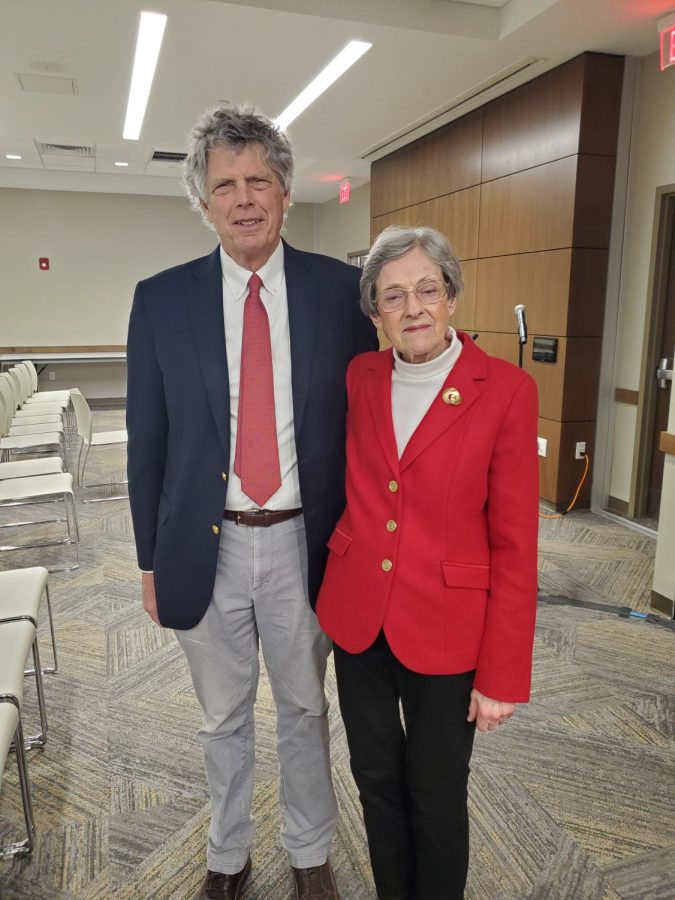 The Institute for Saint Anselm Studies was happy to host Prof. Colish’s lecture

The Saint Anselm Lecture has been held annually on or around Saint Anselm’s feast day since 2000.  Saint Anselm’s day is typically April 21, but the college observed it April 25 this year due to April 21 being during the Easter Octave.

“Professor Marcia Colish is an excellent scholar of medieval history, philosophy and theology,” said philosophy professor and Director of the Institute for Saint Anselm Studies, Montague Brown, who organized the event.  “I had heard her at the 2019 Conference on Saint Anselm at Durham, England.  She also presented at the 2021 Saint Anselm Conference that we sponsored on Zoom last April.”

Professor Colish was happy to be invited and says she enjoyed her visit to Saint Anselm College. “It’s a great place.  I’m delighted to be here,” Colish said.  “It’s a really massive honor to be asked to deliver the Saint Anselm Lecture, which you do once a year.”

Professor Colish’s lecture described these four notable Christian writers, and how Anselm and Bernard challenged Augustine’s views on grace and free will and were more in line with John Cassian’s views.  There was also discussion about how Augustine’s views changed over the course of his life, and why it is important to acknowledge the non-philosophical nature of Cassian’s writings.

Towards the conclusion of her lecture, Professor Colish suggested some lessons the 21st century can take away from this study of medieval theologians.  Some of the most celebrated theologians have questioned and challenged the theological traditions from before them, and those today can do the same.

“These monastic theologians, like other theologians in the Middle Ages felt that they had a right and a duty to scrutinize the theological tradition, to agree with to disagree if they felt it was in the wrong direction, [and] take a principled stand of their own,” explained Professor Colish.  “There are many issues like grace and free will which are open to discussion, and I think students need to know that the Catholic tradition is not cast in iron, it’s not monolithic, it’s not unchanging, and that theologians nowadays have a right and a duty to investigate it and to develop their own critiques of things they think are not relevant or go off to develop their own possible alternatives.”

Those who attended praised the lecture as very interesting and informative.

“Professor Colish gave an excellent lecture,” Professor Brown commented.  “Although it involved some unfamiliar content, especially for students, it was very clear and compelling, with a very informative question and answer period at the end.  I have heard nothing but positive feedback from those who attended.”

“It was a brilliant lecture of this intellectual historian,” commented philosophy professor Max Latona.  “Her talk was very interesting in giving us this set of the tradition of thought following the late Saint Augustine, questions of free will and grace.  I learned a lot about some of the individuals I didn’t know about.”

Other festivities included a mass at 10:30 in the Abbey Church followed by a cake from Davison Hall being served outside.  Professor Colish said she was happy to arrive early enough to attend mass with a monastic community.  The writings of monks like Anselm of Canterbury are a large part of her studies.

“I’m an intellectual historian of the Middle Ages, and back in the day, when I was a graduate student, and I was writing my doctoral dissertation, I had a chapter on Anselm and a chapter on Augustine,” recalled Professor Colish.  “Anselm is a figure I have written about in a number of contexts for a number of years.  He’s not the only person I write about, but I’ve known about his work for a long time, and I come back to him periodically, asking different questions depending on what I’m thinking about at the moment.”

Some students were particularly interested in the food involved with the feast day.  Brendan Fedrizzi ‘24 enjoyed feasting on the cake.

“You know you’ve got to feast on a feast day,” explained Fedrizzi.  “The cake was very good.  It was one of the best cakes I’ve had at events here.”

Celebration of the college’s patron saint’s feast has a role in keeping a unique identity to the college, says Brother Basil Franciose of Saint Anselm Abbey.  These lectures and studies bring out Anselm’s importance to Saint Anselm.  Brother Basil would be interested in different departments and disciples outside philosophy and theology engaging with Anselm of Canterbury more.

“It’s always good to engage our patron.  It’s not about other things.  It’s what makes us a unique institution.  It’s our Benedictine roots, but also our roots in St. Anselm,” Brother Basil explained.  “Ten centuries later we’re still doing the same thing.  Hopefully there’s ‘faith seeking understanding’, seeking a greater depth to why we are here, not just in the world but in the college, and more to the student experience here at the college than just a glorified country club in which we engage our personal interests for our personal benefit.  There’s more to what this school ought to offer, so if we engage with it, things like this, we can begin to spark an interest in seeking truth personally, and how that ought to direct our lives.”