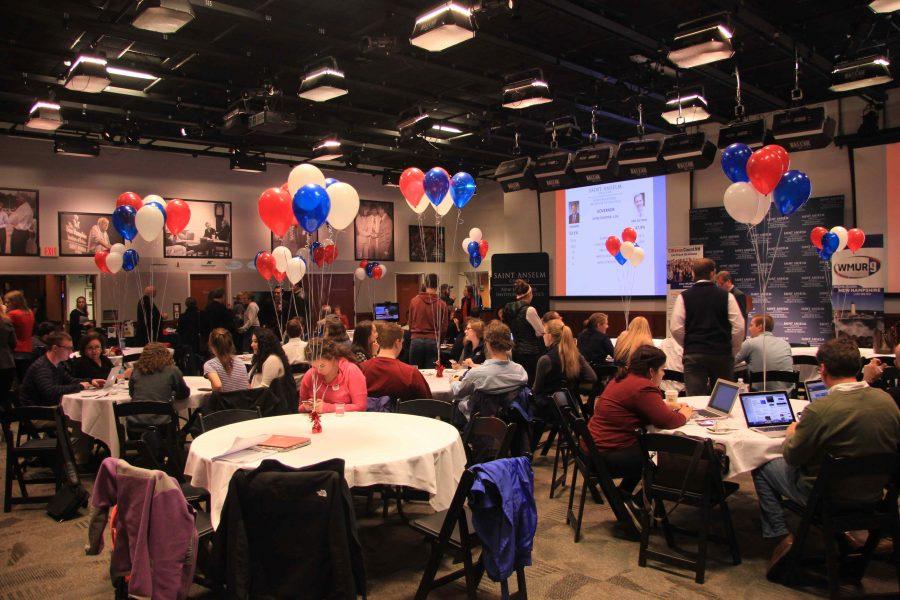 The scene in the NHIOP Auditorium on election night.

According to the Associated Press, Republican Donald Trump has been elected as the next President of the United States.

The AP reported at 2:30 a.m. on Nov. 9 that Trump had been declared the winner in the state of Wisconsin, giving the Republican 276 electoral votes, six more than are required to clinch the election.

In the election for the New Hampshire U.S. Senate seat, Democrat Maggie Hassan defeated Republican Kelly Ayotte. Of the greater than 700,000 votes casted, Hassan held a narrow margin of 1,023 votes over Ayotte according to WMUR. The results of this election did not become official until Ayotte conceded to Hassan just before 5 p.m. Eastern Time on Nov. 9.

According to Neil Levesque, executive director of The New Hampshire Institute of Politics, approximately 250 people attended the event.

“The reason why we did this event tonight is [because] I find that election results are slow, and I wanted to show students, and the public, what it’s like to be in a campaign war room essentially when you’re getting instant results, much faster than you can see them on TV,” Levesque told The Crier.

“When we have these events, they help engage the public, [and] the students in the importance of civic activity. Secondly obviously we get a lot of national attention because of this. The more we get the word out about this college, and it’s students and faculty, and the academic rigor that goes on here, the better it is for all of us,” Levesque continued.

Many Saint Anselm students were among those in attendance at NHIOP to view the election results. The Crier spoke to several students about what they think the importance is of holding political functions like this on campus.

Junior Emma Bishop, a politics and criminal justice double major and president of Student Government Association, said that events like this are “super important and I think it’s what makes St. A’s so special to me. It was such a pull for me to come here knowing not only that we had the [New Hampshire] Institute of Politics here, but we also have the fortune of hosting debates and hosting speakers and events like this.”

Sophomore Ryan Dumont, a politics major, said “I think it’s important to have candidates of both parties [at Saint Anselm], and try to keep it as bipartisan as possible, because not only can people become educated about the candidates by actually physically seeing them and hearing them talk about their platform, but they see both sides.”

“It literally covers all walks of life in a sense, and it is a very unique experience. It’s not an experience that many other colleges can claim,” Dumont continued.

Dumont said in regards to this election, “The candidates need to focus on the issues. That’s the biggest critique, and it’s been going on for too long, and once we get back to focusing on the issues, and focusing on what the American public cares about, we’re going to be on a much better track.”

“The negative ads just kill me, and it makes us as a country look bad,“ Dumont told The Crier.

Bishop also had strong opinions about this election. “It was a frustrating election for me. I find myself extremely torn as a female who wants to have a strong future, and looks forward to a strong future for youth and for other females, and getting more females in office.”

“It is easy to see how frustrated everybody is,” junior Sean Cameron, politics major, told The Crier.

“The parties have gotten so out of touch, people are so fed up that they are voting these political outsiders, who none of the establishment wants. It’s just interesting to see, especially going forward, if in the future, in the midterms, and in 2020 if they keep that up, and keep voting for these unusual different candidates, or if they go back to more of a status quo mainstream candidate,” Cameron continued.

The Saint Anselm Broadcasting Station also provided five hours of on-and-off live coverage of the election on their Facebook page. They had a camera stationed in the NHIOP auditorium, where this event took place.

This article has been updated