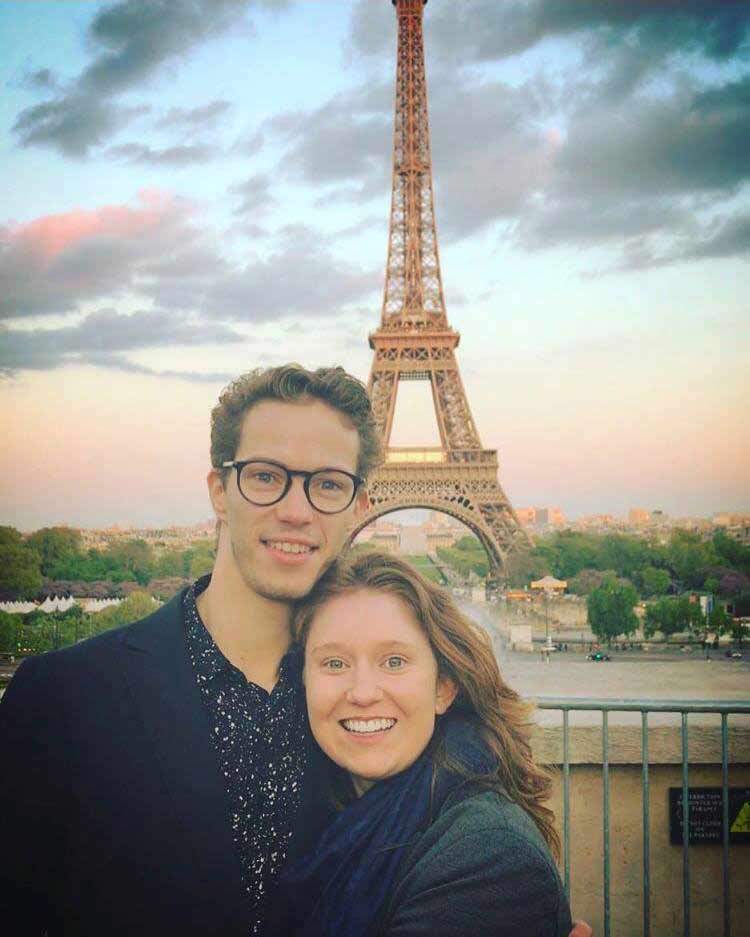 Lauren Batchelder ’19 and Jonas Ben Riala visit the Eiffel Tower a few days before they witness the attack led by Karim Cheurfi on the Champs-Élysées boulevard.

Two weeks ago, a Saint Anselm student sat locked in a restaurant after having fled the scene of a shooting that killed one police officer and harmed two others on the Champs-Élysées boulevard in France.

The New York Times reported on the night of the attack, April 20, that “near midnight, President François Hollande said in an address to the nation that the attack appeared to be an act of terrorism.”

Karim Cheurfi—a “39-year-old French national,” CNN reports—led the attack. Cheurfi did not survive the night. The police shot him dead when he attempted to flee the scene of the attack.

Reports of the attack did not appear until later that night. News reporters broadcasted that François Hollande had called for a defense council meeting for the next day in response to the public distress regarding the attack and the threat it posed on the French population.

Saint Anselm junior Lauren Batchelder studied abroad this semester in Oslo, Norway, but took a short trip over the weekend to France with her boyfriend, Jonas Ben Riala. The two were walking along the Champs-Élysées when they heard sounds from the attack and were rushed into a nearby restaurant.

“I was just walking down that street when I decided to go to a restaurant on the neighboring one,” Batchelder said. “Less than 15 minutes later, people started running, saying there was a fire and that I should run as well.”

Police officers had blocked several roads and directed bystanders who were panicked by the sudden attack along the boulevard into nearby buildings, including the steakhouse in which Batchelder for a couple of hours. She said “people were running and police started pushing people” to get them to safety.

Batchelder also mentioned how she and her boyfriend had wanted to go take a picture of the sunset that evening, but they decided to walk in the opposition direction of the spot where Cheurfi started to shoot.

“To get to where I was staying, I had to go back to the Champs-Élysées, but police were grabbing people to usher them away and finally I ended up in a steakhouse where the waiter ushered me in and locked the door behind me and my boyfriend,” Batchelder said. “It wasn’t until minutes later that I found out there was a shooting. Truly a scary experience.”

The shooting occurred days before the end to the French presidential election campaign. The candidates running for the position mainly focused on national security and terrorism in their final speeches on the days following the Thursday night attack.