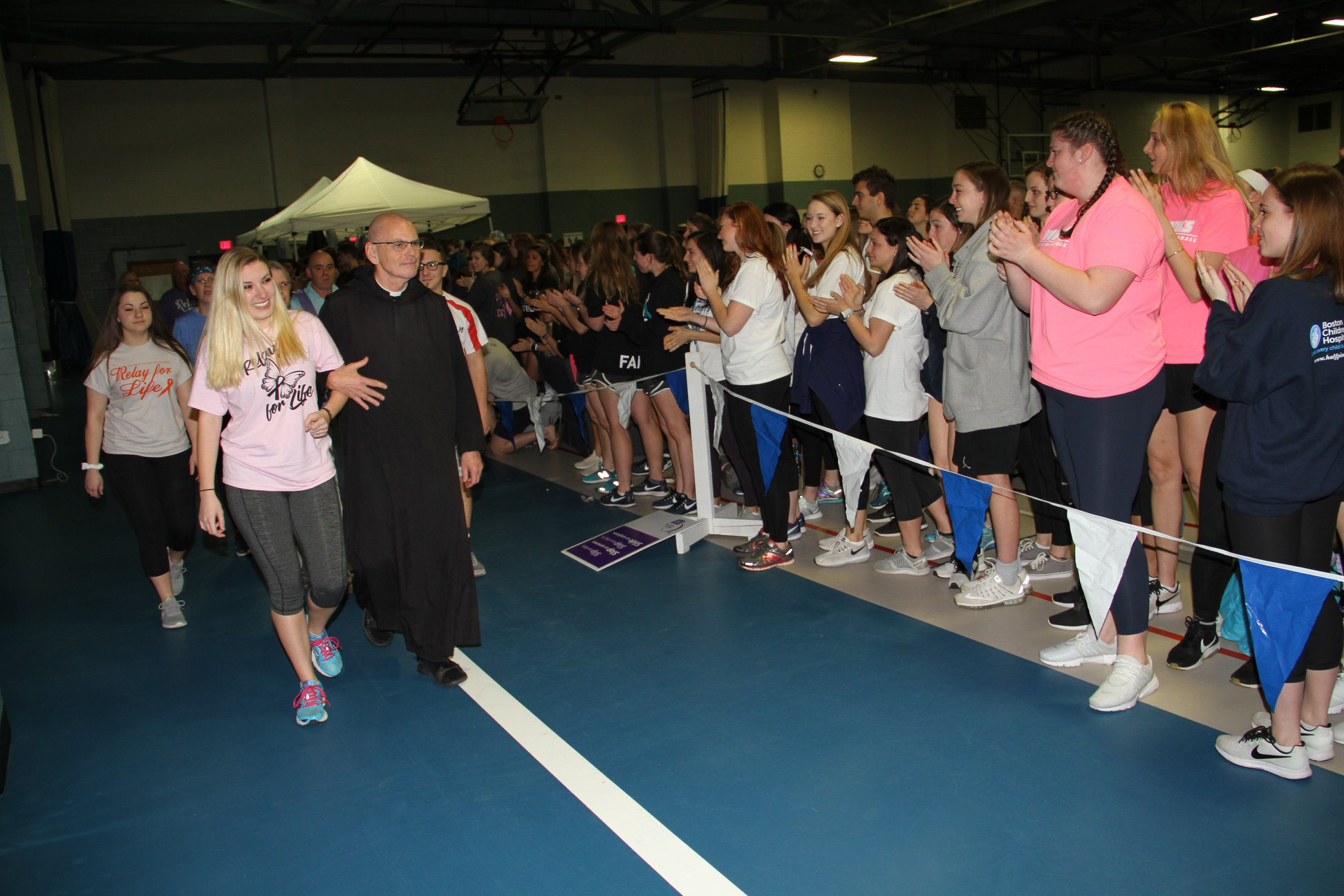 Saint Anselm College students took part in Relay for Life during an all-night event beginning on Friday, April 13. Overall, the event raised over $105,000 in support of the American Cancer Society. Every year, this event brings the Saint Anselm community together in support of lost loved ones, cancer survivors, and those currently battling cancer. The students, faculty, and staff walked this year’s Relay for Life to raise awareness for cancer research and services. Many students stated that this year’s Relay was moving; students felt like they could really “feel the support” from their friends and peers in the community.

Each year at Relay for Life, speakers share their experiences with cancer and the disease’s impact on their lives. These speakers discussed their family members, friends, and even themselves as cancer fighters and cancer survivors. Jordan Ezekiel served as this year’s Grand Marshal. When the Relay for Life members had first reached out to her about speaking and being this year’s Grand Marshal, she was hesitant because it was not something she had ever done before. However, she knew that this was something that she wanted and needed to do for herself.

In an interview, she had stated that she never attended Relay for Life before coming to Saint Anselm College. During her first Relay, she said that she felt more removed from the event than other people. Her experience with Relay for Life has changed throughout those three years, as this past Friday had given her a new experience. This year, Ezekiel was involved with the set up for Relay, where she had realized how much effort is put into this event. She now feels more aware of the effort that is poured into the goals of this event.

In addition to the set-up, Ezekiel gave about a half hour speech about her current battle with cancer, which moved the audience. Ezekiel did not become public about her battle until this semester, and the reactions she had received were sensational. Her speech was full of emotion, comedy, heartbreak, and hope. Her peers in the community had given her unconditional support and love.

Ezekiel was shocked by the outpouring of support from her community members as they approached her after her speech. While describing the feelings Ezekiel experienced during her speech, she stated “It was something that I needed to do therapeutically for myself, and tell my story about what has been going on.”

Ezekiel wanted to show her audience that it is important to raise awareness and inform people that this is something going on in society that should receive attention. Ezekiel also pointed out that people go through these challenges every day: “By looking at me, you would not think that I am going through this challenge,” she explained.

She wanted to leave an impact on her listeners, so that people are informed that skin cancer is something so common, and so important. In fact, many of her peers were moved by this notion, and showed her their unconditional support throughout the night. Her speech was able to give awareness, which is what Ezekiel had intended. In addition, her words influenced her community, peers, and even herself.

During the interview, Ezekiel said, “It was a very impactful night.” She added that some people may have not had a reason to attend Relay for Life, however she felt that she had given them a reason through her own personal story.

She had a different experience through talking to her peers rather than listening, as she got to tell her own story, and share her experience with her community. A Saint Anselm College student had said that this speech had an effect on them, because they are now more aware, and feel that they want to make an effort to help cancer research.

This year’s Relay for Life fundraiser had created impactful memories, as it was a positive reassurance that the Saint A’s community is strong, and its members will always be there for each other. The event showed Ezekiel, and many other students, faculty, and staff what this community is able to accomplish when we come together as Anselmians.