Corruption or justice: America is currently at a crossroads 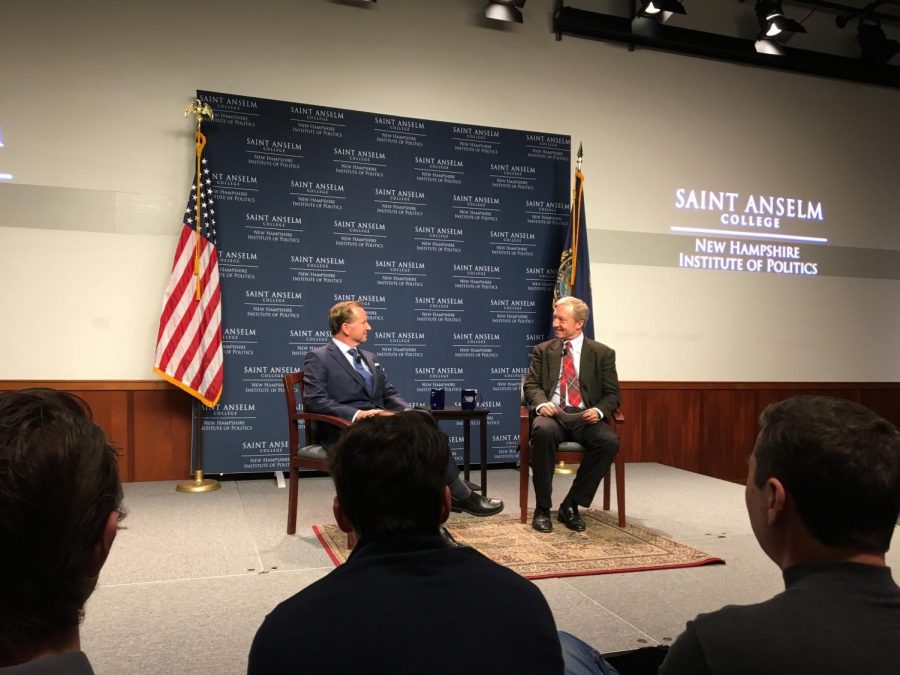 Tom Steyer, founder of Need to Impeach, sat down with former WMUR political director Josh McElveen at the New Hampshire Institute of Politics to talk about impeachment, money in politics, and the problems plaguing American democracy.

Tom Steyer was born in New York City and attended Philips Exeter High School, a boarding school here in New Hampshire, before attending the Stanford School of Business. For what he estimated as 27 years, he ran an investment business firm. As a businessman, he “saw firsthand how our economic system failed working people” according to the pamphlet handed out before the event. Steyer is the founder of NextGen America, a youth voting advocacy agency, and Need to Impeach, believing that President Donald Trump must be removed from office.

Steyer was joined on stage by Josh McElveen. McElveen is a familiar face in New Hampshire politics and at the New Hampshire Institute of Politics. For eight years, he served as the political director at WMUR, an ABC affiliate that broadcasts out of Manchester. In 2017, after leaving WMUR, McElveen founded McElveen Strategies, which, according to its website, specializes in media relations and prepares “today’s CEOs and leaders to maximize media potential.” McElveen acted as a moderator, asking Steyer questions and holding him to “the New Hampshire standard,” which entailed asking him to back up his assertions with sources.

Steyer believes that President Donald Trump needs to be removed from office, saying “we know he’s corrupt.” When asked by McElveen what he means by “corrupt,” Steyer cited two examples.

The first was when President Trump ordered the payment of money to adult film star Stormy Daniels (who’s real name is Stephanie Clifford) and Playboy model Karen McDougal to keep them silent about an alleged affair. In Aug. 2018, Michael Cohen, Trump’s longtime lawyer and self-described “fixer,” pleaded guilty to breaking campaign finance laws, admitting to paying hush money of $130,000 and $150,000 “at the direction of a candidate for federal office” to Daniels and McDougal “with the purpose of influencing the election.”

The second instance Steyer cites, and the one he is more concerned with, is how, according to Steyer, the president takes money from foreign agents. The United States constitution makes it illegal for anyone holding office to “accept of any present, Emolument, Office, or Title, of any kind whatever, from any King, Prince, or foreign State.” In other words, the clause makes it illegal to take money from foreign countries and foreign politicians. Steyer argues that President Trump takes money from foreign agents when they pay for rooms, floors, and offices in his real estate holdings. McElveen noted that “technically you could say he doesn’t” because President Trump’s real estate business is now run by his children. Steyer says he does not see that as a difference.

When asked by The Crier whether he would pursue legal action against President Trump if he lost the 2020 Presidential Election (and thus became a private citizen), Steyer responded that “I don’t care” about Trump the private citizen, his only interest is in “justice and democracy.”

Being that the event was about politics and Saint Anselm is in New Hampshire, home of the New Hampshire Primary, it seemed only natural that McElveen would ask Steyer whether he would run for president in 2020. Steyer said he would do “anything” that he believed would have a positive impact, though he would not give a definitive yes or no answer.

Moving past Trump, Steyer began to talk about the problems in American democracy. According to Steyer, “we are in crisis.” One of the main issues Steyer cited was money in politics, something he describes as “not a partisan issue.” He explained how the increased presence of corporations in the political system over the past 40 years has caused many Americans to believe “the system no longer responds to their interest.” He believed that this declining trust allowed President Trump to win the presidency with the message that he would shake things up and, in the president’s own words, “drain the swamp.”

When asked about Vermont Senator and presidential hopeful Bernie Sanders and whether the Democratic Party was moving “too far left,” Steyer said “bless him” for bringing up wage inequality in 2016 because now “everyone wants to say it.” He added how he believes there needs to be more power for the working people.

Steyer cited the lack of infrastructure in rural parts of the country as a problem. Saying that “we need to [literally] rebuild the country,” he told how he has a friend in West Virginia who physically cannot use the roads because they are in such a poor state. He explained to the audience how you cannot connect with Charleston, the capital of West Virginia, if you cannot physically reach it. Though he notes that investments in infrastructure is important, he also emphasized that any investment must be a smart investment.

Speaking of West Virginia, Steyer said he respected coal miners there, who he described as dying so they can provide for their families. Steyer cited how coal miners are dying younger than most Americans. Most people attribute this fact to black lung disease. Black lung disease or coal workers’ pneumoconiosis is cause by inhaling coal dust. The disease gets its name because the charcoal dust in the lungs can turn them black in color according to the American Lung Association.

With the discussion concluded, Steyer began fielding questions from the audience. One question was from a Saint Anselm student who asked if healthcare should be supported if it raised taxes. Steyer remarked how the American people were already paying for healthcare and it is a matter of “which pocket is paying for it.” According to him, taxes would be raised but, compared to what Americans are paying for healthcare now, it would be cheaper overall.

After fielding questions from the audience, Steyer was presented with a gift from student ambassador Bentley Warren, class of 2021, on behalf of the New Hampshire Institute of Politics.