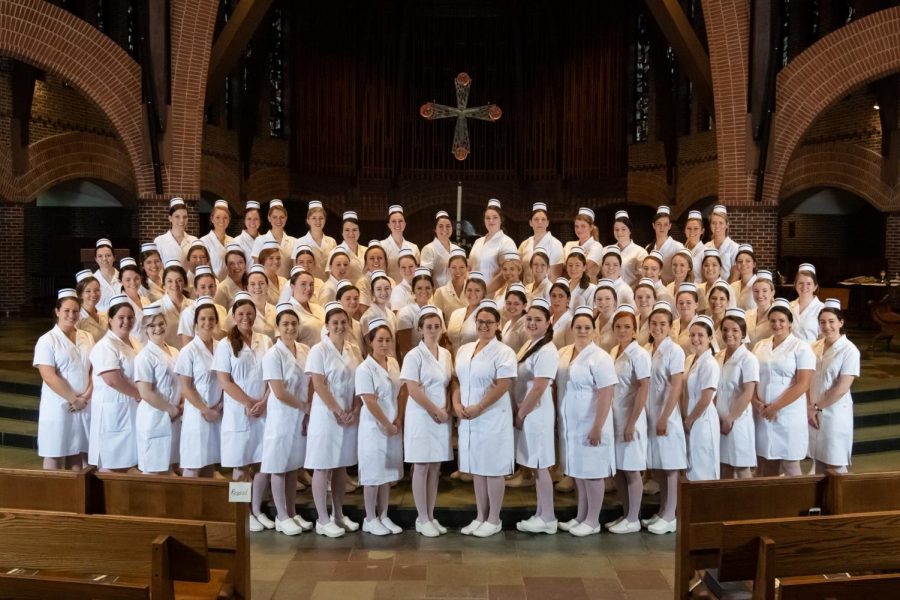 At 9:30 a.m. on Saturday, April 27, sixty-nine senior student-nurses joined together with their family, friends, and professors to receive their pins. The nursing pinning ceremony is symbolic and historic, marking the culmination of four years of challenging coursework and clinical experience. The ceremony was held in the Abbey Church and was followed by Mass, as well as a reception at the Jean Student Center.

Dr. Maureen O’Reilly, the Executive Director of the Nursing Department, gave the opening remarks. O’Reilly encouraged the student nurses to keep learning, particularly in the field of ethics, as they embark on their nursing journeys. She implored them to use their experiences to advocate for better healthcare and patient care. Congratulating the students, she acknowledged their exceptional potential, reminding them that they “can be the tidal wave of the future.”

Dr. O’Reilly’s remarks were followed by greetings from college President Steven DiSalvo. President DiSalvo congratulated the student nurses on their “rite of passage as [they] formally enter the nursing profession.” He urged them to excel in their field but to remember their roots – the school, program, and professors who helped them to succeed. He thanked the student nurses for their dedication and commitment to the field. He also extended this thanks to the students’ families for encouraging the generous and selfless spirit required of the nursing profession.

Nursing student speaker Mollie Mannion then spoke about the nursing school experience and the necessary humanity of the field. She compared the nursing program to a storybook in which every classmate, professor, mentor, and patient is a character and every learning experience, both in the classroom and in the field, is a chapter. This story began with introductory nursing classes freshman year, which emphasized the empathy necessary to treat patients as human beings. Mannion then explored how the program trained the student nurses in the “spirit, science, and art of nursing” through its rigorous classes and clinical experiences. This storybook, Mannion reminds her classmates, will contain unexpected plot twists which will require them to rely on their training in empathy. Connecting with patients and families as fellow human beings will remain essential. Mannion concluded her speech by encouraging listeners to seize each day to learn, grow, and be the best version of themselves.

Mannion’s speech was followed by the blessing of the pins with holy water by Father Stephen Lawson, O.S.B. The pins were then systematically presented to the students by the nursing professors. The students were also given sunflowers.

The Saint Anselm College nursing pin features a shield containing references to the college seal. Included is a lamp, referring to Psalm 119:105 (“Your word is a lamp of my steps and a light for my path”). The phrase Initium Sapientiae Timor Domini is inscribed on the pin, translating to “The fear of the Lord is the beginning of wisdom.”

After the pins and sunflowers were presented, three awards were also presented. Senior nursing students Cassidy Diaz and Cecilia Mercadante received the Dr. Joanne K. Farley Award, which honors longtime Saint Anselm College community member and representative of the nursing spirit, Dr. Joanne Farley. Francesca Sciacca received the Student Nurse Leader Award in Memory of Dr. Joyce Clifford. Dr. Clifford was a trustee of the college, one of the first graduates of the college’s nursing program, an inductee of the Fellowship of the American Academy of Nursing, and a developer of primary nursing at Beth Israel Hospital in Boston.

After the presentation of awards, each student nurse received a lit candle. The student nurses, along with other nurses in the assembly, recited the Nightingale Pledge, vowing to serve their patients with integrity and compassion and remain committed to lifelong learning.

The pinning ceremony then transitioned into Mass, celebrated by Father Stephen. After Mass, guests gathered in the Event Space in the Jean Student Center for light fare and a nostalgic slideshow.