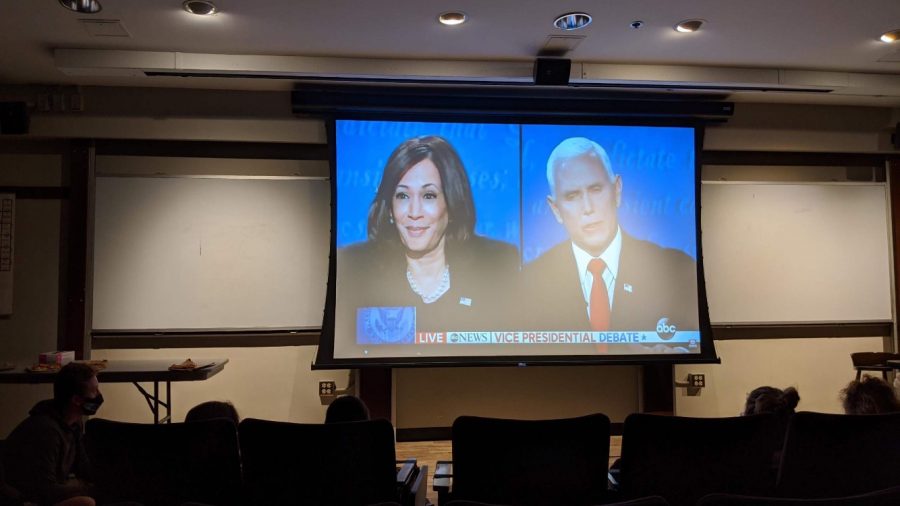 Vice President Mike Pence and California Senator Kamala Harris met in Salt Lake City for the only Vice-Presidential Debate of the 2020 election. The debate, which was hosted by the non-partisan Commission on Presidential Debates, took a more civil tone than the “hot mess” of the first Presidential Debate just over two weeks ago. Similar to last time, there were interruptions by the candidates on stage, but most people watching it agreed that this time was better. Kenneth Tran, class of 2023, told The Crier that the debate “was a very nice change of pace from last time.”

The event made history with Harris becoming the first woman of color to ever participate in a vice-presidential debate. Professor Jennifer Lucas, a politics professor who also specializes in gender and politics, told The Crier that Harris was forced to adhere to a delicate balance. “We usually refer to this as the double bind; female candidates have to be strong enough but not too strong,” Lucas said, “for a Black woman, it is even more difficult because they are often negatively stereotyped as overly aggressive anyways.” That being said, Lucas added that Harris “hit the right tone” throughout the debate and stood “her ground and saying ‘I’m speaking’ when the Vice President cut her off, she wasn’t particularly aggressive but firm and not overly
yielding.”

Once again, the New Hampshire Institute of Politics’ student ambassador program hosted a debate watch party, this time in Perini Lecture Hall. Social distancing, the crowd in Perini laughed, eye-rolled, and responded to the debate in real time. The first topic of the night, unsurprisingly, was the Coronavirus.

The Coronavirus, which has killed 212,000 Americans, took center stage during the debate. On this issue, Harris came out swinging, attacking the Trump administration’s response to the virus, calling it “the greatest failure of any presidential administration.” Harris also questioned the effectiveness of President Trump’s strategy to downplay the virus in order to avoid a panic, asking the audience, “how calm were you when your kids were sent home from school and you didn’t know when they could go back? How calm were you when your children couldn’t see your parents because you were afraid they could kill them?”

Pence shot back, saying if one looks at the plan put forward by the Biden campaign, “it looks a little bit like plagiarism, which is something Joe Biden knows a little bit about,” a not-so-subtle nod to Biden’s 1988 presidential campaign. Pence also argued that under a Biden administration, more people would have died if his response was similar to the Obama administration’s handling of the Swine Flu, also known as H1N1.

According to multiple polls, Trump’s handling of the virus is not an issue that Trump can win on with an average of 56.6% of Americans disapproving of his handling of the crisis. Therefore, it must have been a relief for Pence when the topic changed to the economy. Pence told the audience, “the American economy, the American comeback is on the ballot with four more years of growth and opportunity with four more years of President Donald Trump.” Harris objected, reminding Pence that “Moody’s, which is a reputable Wall Street firm, has said [Joe Biden’s economic plan] will create seven million more jobs than Donald Trump’s.”

Harris also appealed to students, saying she thinks about people coming out of “college right now and you’re wondering, ‘Is there going to be a job there for me?’” Harris’s message resonated with some people in Perini Hall as two students, sitting on opposite sides of the room, responded in unison, saying “nope.” It was soon after that, that the most memorable moment of the night, according to social media, occurred. While he was arguing that systemic racism is not a problem in this country, a black fly landed on Pence’s snow-white head of hair.

In Perini, the hall broke out into rancorous laughter as students pointed, snapped pictures of the projection screen, and cracked jokes. Whatever point Pence was trying to make about race in America was lost to the audience, as the black dot in the sea of white took center stage and thunderous laughter drowned out the rest. On the topic of race in America, Harris called the Breonna Taylor case a grave injustice while Pence said justice was served. Taylor was shot in her home in Louisville, KY, while police were executing a no-knock warrant and her boyfriend, believing the police to be robbers, fired his gun in self-defense.

The police said they announced themselves, but Taylor’s boyfriend said he did not hear them, as did 11 of the 12 witnesses The New York Times interviewed about the incident. There was question dodging from both sides during the debate. Pence failed to answer moderator Susan Page’s question on why there have been so many coronavirus deaths in the United States compared to the country’s population and other wealthy countries. Harris, for her part, failed to answer Pence’s question on whether or not a Biden administration would pack the Supreme Court in response to a conservative majority.

According to David Trumble, the coach of the Saint Anselm College debate team, Pence’s questioning “was his clearest and best argument of the night. The Democrats need to figure out an answer to that question.” As the debate ended, students expressed their opinions to The Crier. Kenneth Tran did not believe anyone won, saying “I don’t think there’s ever a winner in any presidential debates…debates are more of a way for voters to gauge how they feel about a candidate.” In contrast, Kathryn Monahan, class of 2023, thought Harris won, saying “I thought her answers were more direct. I thought she spoke more to the American people than Pence did.”