A crisis of credibility: The effect of rhetoric on the D.C. riots 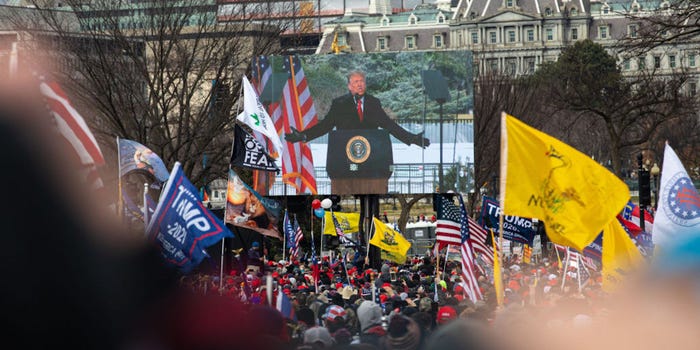 Many are claiming Trump's rhetoric kick-started the riots seen on Wednesday, January 6 at the U.S. Capitol building.

In the days following the Pro-Trump riots in Washington D.C on Wednesday, several of Trump’s advisors and staffers have chosen to step down from their positions in the White House, the most recent being Education Secretary, Betsy DeVos.

In her letter of resignation to the President, DeVos wrote that “There is no mistaking the impact your rhetoric had on the situation, and it is the inflection point for me.”

DeVos is not the first person to discuss Donald Trump’s use of rhetoric; Congressmen, White House staffers, and the media have been directly attributing the riots to his choice of words during the rally outside of the White House on Wednesday morning, and throughout his term in office.

In a statement made on Wednesday, President-Elect Joe Biden addressed the nation with a simple message. “The words of a President matter, no matter how good or bad that President is. At their best, the words of a president can inspire. At their worse, they can incite” Biden stated.

This most recent discussion surrounding rhetoric has piqued the interest of communication scholars, especially considering the increased use of the word “rhetoric”. Saint Anselm College Communication Professors Marchiselli and Picciotto weighed in on this discussion with their observations.

In regard to the rhetorical events leading up to Wednesday’s riots, Professor Marchiselli attributes the buildup of tension to “false information, the media environment, and the prepping of the audience. This was not a solitary event, but rather the result of the discursive environment that preceded it.” In Communication studies, the term “rhetorical” refers to the images, speeches and written word that conveys an intended message.  Marchiselli also discussed the power of repetition in rhetoric, and how it aids to reaffirm and solidify what has already been said.

Professor Picciotto, an expert on visual rhetoric, took note of the photographs taken during the riots, mentioning an article by BuzzFeed News Reporter Elamin Abdelmahmoud that argued the rioters “did it for the ‘gram”, referring to the app Instagram.

“There have also been a lot of photos circulating contrasting the police response to the MAGA riot and the Black Lives Matter protests”, he added, “which raises an interesting question about race and politics”.

When discussing the claims of voter fraud and fake news, Marchiselli asserted “There is a crisis of credibility in a social media environment, where people may have a difficult time determining what is and is not a credible source of information.”

“Critiques of the media have always existed. With the conglomeration of media we’ve seen a rise in the spectacularizing of media, as opposed to the contextualization. However, viewing the media as the ‘enemy of the people’ is an obvious attempt to discredit the 4th estate (journalists/news media)” Marchiselli stated.

During the discussion of media, Professor Picciotto brought up social media apps such as Tik Tok, where teenagers and young adults are expressing their frustrations by relating the lockdown on Capitol Hill to gun violence and drills in public schools.

“We are only just beginning to see what the response and ripple effect of this riot will be”, he said.

He also mentioned seeing videos of Black custodians sweeping up the rioter’s mess on Capitol Hill, saying “Who will pick up the pieces of this broken country in the years to come? We see this repeated narrative of People of Color cleaning up after their White counterparts. Certainly, there is a need for change and work to be done.”

Continuing with the discussion of visual rhetoric, Professor Marchiselli added that “one image that stuck with me was of the two young women carrying the ballot box out of the building. It feels strong and provides a sense of hope.”

The events of these past few days have shown the importance of rhetoric in both visual and verbal forms, and will hopefully show lawmakers and citizens alike that words truly do matter.