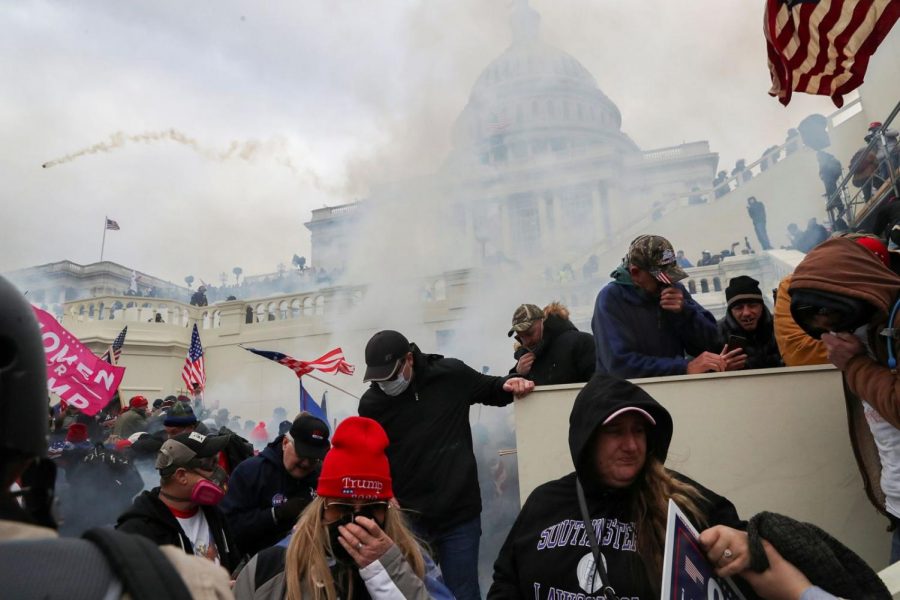 Tear gas explodes as Trump supporters force their way into the U.S. Capitol on Wednesday.

An angry mob stormed the U.S. Capitol Building Wednesday in an unprecedented attack on the premier symbol of American democracy.

Both houses of Congress convened Wednesday, Jan. 6, in Washington to certify the election of President-elect Joe Biden, the Democratic nominee. Traditionally, the sitting vice president, who serves as president pro tempore of the U.S. Senate, is handed a state’s electoral votes, they read them to the joint session, and if there are no objections, the votes are entered into record.

The event is strictly ceremonial, and in 2016 it took less than an hour, according to several news sources. Around 11:30 a.m., when the Electoral College votes for Arizona were presented, U.S. Rep. Paul Gosar of Arizona and U.S. Sen. Ted Cruz of Texas, both Republicans, raised objections. The Senate then returned to its chamber on the other side of the Capitol Building and the two houses started to debate on whether to reject Arizona’s official electoral votes. Before the process began, Senate Majority Leader Mitch McConnell said on the Senate floor any attempt to overturn the results of the November election would send American democracy into a “death spiral.”

Outside, tens of thousands of supporters of U.S. President Donald J. Trump, the Republican nominee who trailed Biden both in popular votes and Electoral College votes, had begun to gather on Capitol Hill. Earlier in the day they had attended a rally at the White House where former New York Mayor Rudy Giuliani demanded “trial by combat”, and President Trump told them “you will never take back our country with weakness,” according to video of the rally. As more people began congregating outside the Capitol, they slowly began pushing towards the building, climbing walls, and eventually breaking doors and windows to get inside.

At around 1:30 p.m., the Capitol Building was placed on lockdown as protesters, now forming into a mob, forced their way inside. Video clips from that day show people using fire extinguishers and riot shields to smash open doors and windows. In the Capitol crypt, located beneath the dome and Rotunda, video showed Trump supporters brawling with police. The Senate chamber, recently evacuated, was breached by the mob.

House Speaker Nancy Pelosi’s office was broken into and rioters took pictures of themselves sitting at her desk. Across the building, Capitol and D.C. Metropolitan Police barricaded the doors of the House chamber with whatever they could and drew their guns as rioters smashed the windowpanes on the door. Tear gas canisters, believed to have been brought to the scene by elements within the mob according to CBS News, exploded in the halls of the nation’s Legislature and a gunshot struck a woman, who was rushed to a hospital but later died, several news agencies have reported. By the end of the day, four people were dead; three appeared to have succumbed to personal health issues.

Things were mostly silent at the White House. President Trump tweeted, asking the mob to remain peaceful, but did not schedule any televised address.

Around 4:40 p.m., President-elect Joe Biden spoke to the nation from Delaware. In his address, he said how “at this hour our democracy is under unprecedented assault unlike anything we’ve seen in modern times…” and the scenes playing out in Washington “…do not reflect a true America, do not represent who we are.”

Instead, Trump released a video to supporters on Twitter in which he said “I know your pain. I know you’re hurt. We had an election that was stolen from us. It was a landslide election, and everyone knows it, especially the other side, but you have to go home now.” The video, which repeated the president’s false claims of electoral fraud, was later taken down by social media companies, citing how the message did more harm than good.

Twitter said of the video it “can’t be replied to, Retweeted, or liked due to a risk of violence,” according to the label the company placed on the video. Trump closed his Rose Garden message by telling the mob, “we love you, you’re very special.” Despite the president’s message, the mob did not leave by choice.

Instead, by 5 p.m., the D.C. Metropolitan Police, Capitol Police, and the F.B.I. began retaking the building by force with the mayor of the city issuing a 6 p.m. curfew and threatening to arrest violators. Live videos broadcasted on the major networks showed police pushing the mob out of the building with strobe lights and tear gas, securing the building by 5:50 p.m.

Once the Capitol was secured, Vice President Pence, the Senate and the House of Representatives reconvened in the Capitol to complete the day’s business. Representative Gosar and Senator Cruz’s objection to Arizona’s Electoral College votes was defeated by the Senate by a vote of 94-6 and by the House by a vote of 303-121. By 4 a.m., Congress had confirmed the election of Joe Biden as the next President of the United States.

Mulvaney told CNBC in an interview, “I can’t stay here, not after yesterday.” These, in all likelihood, are the first of many resignations to come. Trump has been temporarily suspended from using Twitter and Facebook and his staunchest ally in the Senate, Lindsay Graham of Georgia, abandoned him, saying “count me out, enough is enough” in an address to the Senate. Graham was not alone in criticizing the president.

Sen. Mitt Romney of Utah, also a Republican and the party’s presidential nominee in 2012, called the day’s events, “an insurrection incited by the President of the United States,” adding how the objections brought to the floor were “due to a selfish man’s injured pride and the outrage of supporters who he has deliberately misinformed for the past two months and stirred to action this very morning.”

Reports of cabinet members in the White House contemplating using the 25th Amendment to remove Trump from office began swirling around midnight and, across the country, talk of impeachment is common. The day after the riot, top Senate Democrat Chuck Schumer called for the 25th Amendment to be invoked. If this comes to pass, Trump would be barred from ever holding the presidency again.

Looking at the day’s events in the long-term, what transpired on January 6 will go down as one of the darkest days in the history of the American Republic. A mob egged on by the President of the United States stormed and desecrated the country’s “Citadel of Liberty,” its’ governmental heart, the Capitol Building. Their goal was to disrupt a ceremony which served as the official capstone to the 2020 election, a free and fair election.

As a republic and a democracy, the U.S. relies on the peaceful transition of power, set as the norm by President John Adams in 1800 when he conceded to Thomas Jefferson, the third president. America’s democracy, a thing which was seen by the world as a leading example, was brutalized on Jan. 6. With Biden due to be inaugurated Jan. 20, the clock is ticking on the Trump presidency. Many citizens hope that is not the case for the democracy in this republic as well.