$2M drive opens to give Humanities center a home 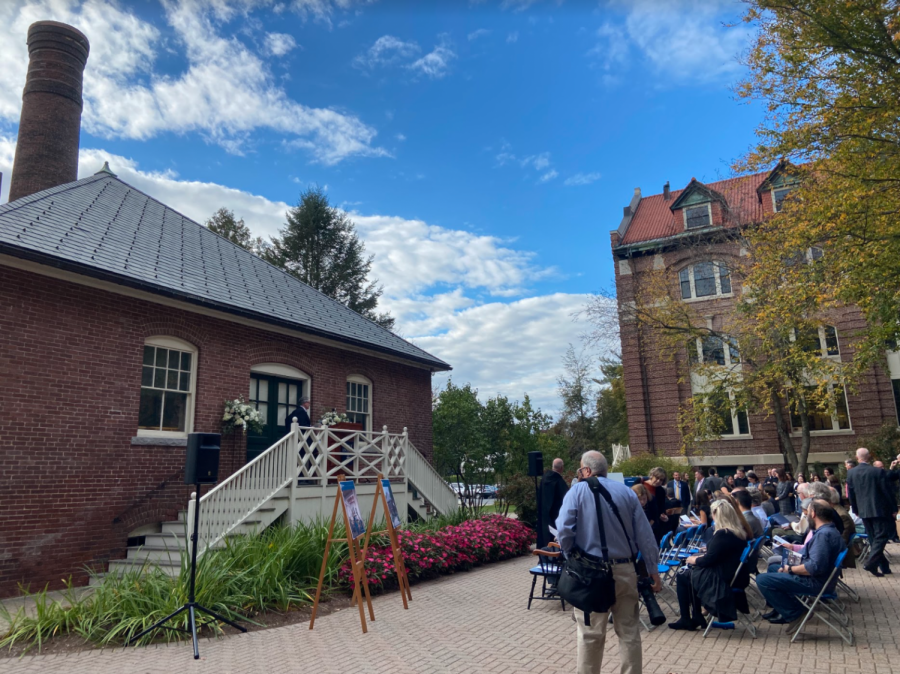 Gregory J. Grappone led an examined life; one that Socrates depicted as the only one worth living. Grappone held an intellectual curiosity that was rooted in the great books and the belief in humanity. And it is because of his academic ambition that the new humanities institute is being built in his name.

Saint Anselm College aims to build a permanent home for the new Gregory J. Grappone ‘04 Humanities Institute. The ambition of the foundation is to integrate the humanities in the Saint Anselm community in a more accessible manner. In the Capital Campaign event that took place October 14 behind Alumni Hall, senior Great Books major Amelie Crowe depicted her experiences within the humanities and the value these experiences hold. Crowe stated that the humanities means “constant, rigorous encouragement to never settle, and instead to keep pursuing the truth – but it also means never having to do it alone.” Crowe furthered her humanities rhetoric by explaining how, on the Saint Anselm Campus, within the humanities community her own perspectives have been holistically broadened.

It is because of Crowe’s experiences that honorable people such as Campaign Chair Ken Burns and Executive Director Dr. Gary Bouchard dedicated their efforts to build a tangible location for the study of humanities. Dr. Bouchard specified that the institute itself will serve not just as classrooms but as a living room devoted to bolstering the phrase “carrying on that conversation.” Here, conversations between a diversity of students and community members are set to flourish in a manner of reflection about the things that matter most.

One of the students that this institute targets is alumnus Greg Grappone. Grappone graduated in 2004 as a Great Books major and exemplified a persistent engagement in asking the bigger questions in life that would often fall unanswered. Grappone was said to have relished in the stories the Great Books told and viewed them as life companions rather than just educational implements. It was at 35 years old when Grappone devestantly lost his battle with cancer. He is fondly remembered as a kind and humble son, father, and student and, according to his mother and father, Beverly and Robert, “with the humanities institute, we honor Greg’s lifelong quest for learning and for meaningful human connection.”

Students similar to sophomore Riley Buchanan eagerly anticipate the opportunities made available through this institution. Buchanan equated the Grappone Institute to the New Hampshire Institute of Politics. Buchanan explained, “We see the benefits of NHIOP being a physical place for political discussions and events to occur, and that’s our goal for the Greg Grappone Humanities Institute.  Humanity is something that we all have in common, so this building will be a place where anyone is welcome to discuss and learn from each other.” Buchanan works closely with Dr. Bouchard as his assistant and has been assisting in the programming and operations of the humanities institute. She exemplifies the weight of student interest and necessity for a location to expand growth within the humanities at Saint A’s. Sophomore James Maloney emphasizes student interest by explaining how the physical institute will aid in his future participation with the humanities. He is hoping to utilize the area for his humanities podcast, “Humanity Explained,” and to simply hang around.

The institute itself will feature a two story facility located where the current print shop is on campus. It will hold a seminar instruction room, a classroom, a common room, an exhibition space, and a restored courtyard. The humanities department outlines their 364 day vision by identifying the common goal of hospitality, reflection, and promoting diverse communication on campus. With regards to the institute’s timeline, Jim Flanagan, a member of the Campaign Steering Committee depicted that “the campaign was launched in January 2021 and is slated to end on June 30, 2022. The plan is to begin construction in May 2022 and to complete the project around April 2023 with a grand opening shortly after the project is completed.” As the institute’s project continues to develop, donations can be readily accepted at https://www.anselm.edu/humanities-institute/give