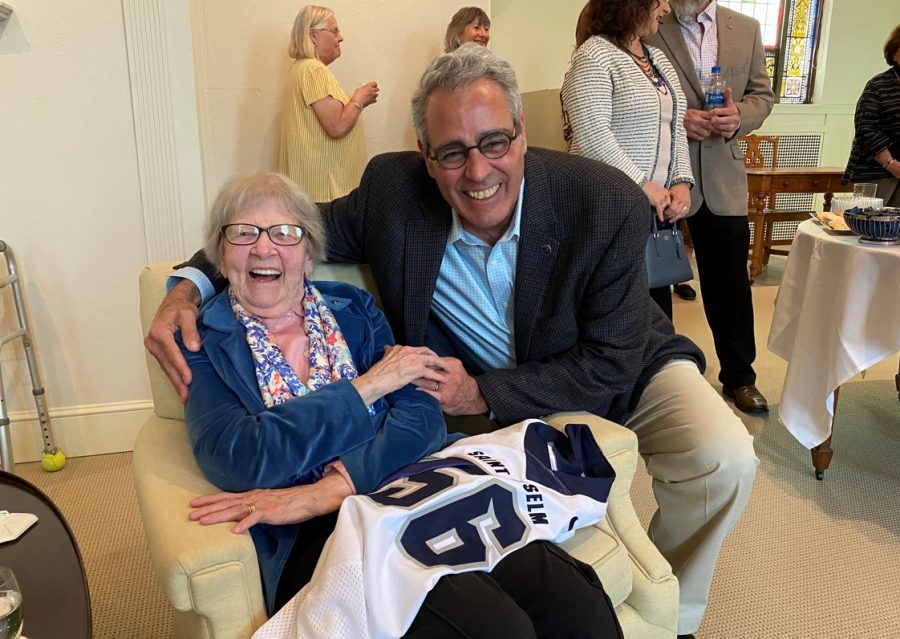 MANCHESTER, NH – She attends 11 a.m. Sunday Mass in Saint Anselm Abbey Church faithfully each week. She’s a regular at almost every concert, lecture, play, exhibition and other cultural performances. She’s been known to sit in on classes and fit in football games when she can. With her late husband, she has provided support to the Geisel Library, the Department of English, the Geisel Library, the New Hampshire Institute of Politics and the college generally. And, by the way, she’s 100 years old!

Ruth Conley seems to be almost everyone’s favorite Anselmian – and she has solid credentials. This Manchester native, who enjoys good health and still lives on her own in her West Side home, is a Saint Anselm alumna, nurse, retired faculty member, faculty wife and benefactor. Presidents, deans and other administrators, numerous faculty members, alumni, and plenty of students and monks know her wit, seek out her wisdom and rely on her encouragement – all delivered with her unassuming, plain-spoken and gentle approach to life.

Conley marked her personal centennial May 15 with family and close friends after morning Mass at the abbey, where a special petition for her continued happiness and health was read. At the end of Mass, Abbot Mark A. Cooper, O.S.B., presented her with a bouquet and the monks and congregation serenaded her with the traditional “Happy Birthday” tune. She continued her birthday festivities with a college celebration two days later at the Alva de Mars Chapel Art Center on campus, hosted by Father Iain G. MacLellan, O.S.B., director, with Jim Flanagan, vice president for advancement, as master of ceremonies.

English Professor Gary Bouchard, director of the Gregory J. Grappone ’04 Humanities Institute, provided an overview of Conley’s relationship with Saint Anselm and read an “adapted” Shakespeare sonnet in her honor. Father Iain presented the new centenarian with a framed, limited-edition reproduction of an engraving of Albrecht Dürer’s “Virgin and Child on a Crescent Moon with a Starry Crown and Scepter.” The engraving Is part of the MacDonald Collection in the Chapel Art Center, while the original artwork is held by The Frick Collection, New York.

Conley herself then was invited to cut a large 100th birthday cake for the assembled crowd, which sang “Happy Birthday” accompanied by Aidan Lewis, an English and philosophy double major and a 2021 Saint Anselm graduate from Weymouth, MA. He provided background music throughout the reception. Carolyn Hill, this past academic year’s Conley Scholar and a May graduate, also attended the event. She plans to pursue graduate studies in English at Boston University this fall.

The daughter of Lena (Itskowitz), an immigrant from Austria-Hungary, and Daniel Joseph McCarthy, the son of Irish immigrants, Conley was born May 15, 1922. Her father worked in one of the city’s shoe mills. The second eldest of seven McCarthy children, she attended local schools, graduating from Manchester Central High School in 1939. With the Depression still under way and World War II right around the corner, Conley worked at the Belmont Lunch, a restaurant on the East Side of the city.

“We had teachers, lawyers, milkmen, telephone workers among diners, a very nice clientele,” she said, “and the food was delicious home cooking. No liquor!”

She said a full, three-course meal was $2, and a waitress could pick up a dime tip. For a decade, she held on to her waitressing work. She said she is grateful for her many experiences at Belmont Lunch.

“The owners always treated me well and looked out for me. They took me to places I’d never have been able to see. Nice restaurants and even New York for shows on stage. They kind of adopted me.”

But Conley wanted something more. Having met Ruth Bagley, who would eventually establish the nursing program at Saint Anselm but who was director of nursing at the Elliot Hospital, Manchester, at the time, Conley was encouraged to pursue R.N. training. She entered the Elliot program in 1950 and completed her studies in 1953. Later, when Saint Anselm opened its B.S. degree program in nursing, she enrolled and won her degree in 1956. Even before Conley started classes at the Elliot, she took a correspondence course in chemistry from Boston University – and earned an A+, a grade of which she is especially proud.

Mae (Durning) Davis, another legendary figure at the beginning of the Saint Anselm nursing program, arranged for Conley to pick up science courses such as chemistry, microbiology, pharmacology and anatomy and physiology.

While Conley was busy with her studies and her commuting to campus from downtown, she attracted the notice of a young professor of classics and English. In those days, college teachers often taught in several disciplines – and the late Austin L. Conley was something of a Renaissance man anyway.

“I don’t know how it happened that Austin wanted to marry me. I wasn’t looking. I was too busy. ‘Maybe when I come back from military service,’ I told him. But he wanted to get married right away, ‘now or never,’ he said. Students in class told me he was smitten, but I wasn’t.”

Maybe she wasn’t smitten then, but in due course.

Ruth (McCarthy) Conley finally agreed, and she and Austin Conley were married at Our Lady of Perpetual Help Church, her home parish in 1956, shortly after she received her degree. The Pentagon had to make do with other nurses. The parish was merged, and the church demolished – but Conley endures.

No conversation with Ruth Conley omits a reference or a remembrance of her beloved Austin, who died in 2009 at age 90. A native of Providence, R.I., he held degrees from Providence College, Boston College and Saint Michael’s College. He was one of a handful of lay teachers in the late 1940s and ‘50s at Saint Anselm, before the college’s expansion in the 1960s and beyond. He taught for 36 years at the college, 26 of them as chair of the Department of Classics. The Conley Scholarship, established in 2001 for a top-ranking English major, is perhaps he most obvious of the generosity of Ruth and Austin Conley, but is only one of many endeavors, programs and initiatives that continue to win her support each year.

“I can’t believe I’ve lived 100 years! When I look back on my life, it’s like there was a script for it. God really does have an amazing plan, but he’s so secretive! He doesn’t tell you a thing!” she observed with a smile.

“Saint Anselm is the best place in the world, and the Benedictines are the best people! I couldn’t have had a better life than the way it was. I admire Ruth Bagley, the epitome of a nurse. I never saw her practice, but as an administrator and teacher, she was amazing,” said Conley.◄