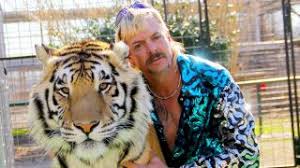 After hearing all of the buzz about the new Netflix show Tiger King, I knew that I had to watch it. Based on the title itself, I had no idea what it was about, but memes on the internet informed me that it was about the life of Joe Exotic, a gay tiger-keeper with multiple husbands who vehemently hated Carole Baskin, a woman he accused of murdering her husband.

Although the television show initially appeared to be about keeping big cats such as leopards, tigers, and lions, it soon became apparent that the main focus of the show was the multi-faceted and complex relationships between all of the characters that were introduced. I made my boyfriend sit down and watch the whole series of seven forty-minute or so episodes over the course of twenty-four hours. Honestly, the show is a lot to take in, so I sat down and re-watched the entire series again by myself, along with doing a lot of readings online hoping to delve deeper into all of the bizarreness.

I have always had an affinity for tigers, especially because they happen to be my Chinese zodiac animal. My favorite stuffed animal from my childhood is a stuffed tiger I creatively named Tigee. I remember seeing tiger shows at state fairs in Maine in my childhood and being amazed by the beauty and strength of the wild animals.

It’s quite gross to think of these magnificent big cats as “collectibles,” and the dark trade of big cats was exposed in the show, although that was not viewers focused on. Joe Exotic is not a protagonist, although we can love him for his unique ways. There is no doubt that he committed a wide variety of crimes, which include shooting tigers to death to “euthanize” them, and trying to hire a hitman to kill Carole Baskin at least twice.

Although there are people vocalizing how they want Joe Exotic to be freed from prison, but honestly, I do not think it is the best idea. There are so many inmates who are actually wrongfully committed, such as those who were sentenced in a disproportionately severe way due to racism in the criminal justice system. Joe Exotic complains about being confined in a cage- but isn’t that the same fate he resigned thousands of tigers to?

Beginning the documentary, I really wanted to like Carole Baskin. I admired the importance that big cats had in her life, and how much cats meant to her. The documentary definitely sways you to have a negative view of her, especially when the conspiracy theories about her missing husband were introduced. When Carole made an offhand comment saying that the most efficient way to get a tiger to attack someone was to cover them in sardine oil, many viewers speculated that she was speaking from experience.

I think another factor in Carole’s untrustworthiness is that she did not appear visibly sad or distraught when discussing her missing husband. She did not even seem saddened that she was blamed for his disappearance- she simply laughed it off. We all have our own means of coping with blame and discomfort, but viewers could see this reaction as suspicious.

As someone who loves tigers, I hate the idea of them just being used as props in photos. The biggest issue with Joe Exotic is that he would breed so many tigers to have a constant supply of tigers young enough not to be dangerous to customers who wanted to take pictures with them. A tiger’s life should be valued and respected at each age- not just when they’re young and cute.

I have nothing against zoos and wildlife reservations that provide animals with adequate nutrition, stimulation, and room to roam. However, I have issues when the owners of the zoo are more concerned about bringing in money, rather than the health of the animals- such as Joe Exotic was.

In my opinion, the only likeable person in the documentary was Saff. Saff lost an arm to a tiger-related injury but still maintained grace and composure. He persevered and returned to caring for tigers, not being scared off. In the last episode, Saff said the most striking thing in the entire documentary- that Doc Antle, Joe Exotic, and Carole Baskin all claimed to care about the big cats- but at the end of the day, no cats were benefited by the self-interest and outrageous behavior that was exhibited.

If you haven’t seen the show yet, I strongly recommend it. It is likely the most iconic television show of 2020.