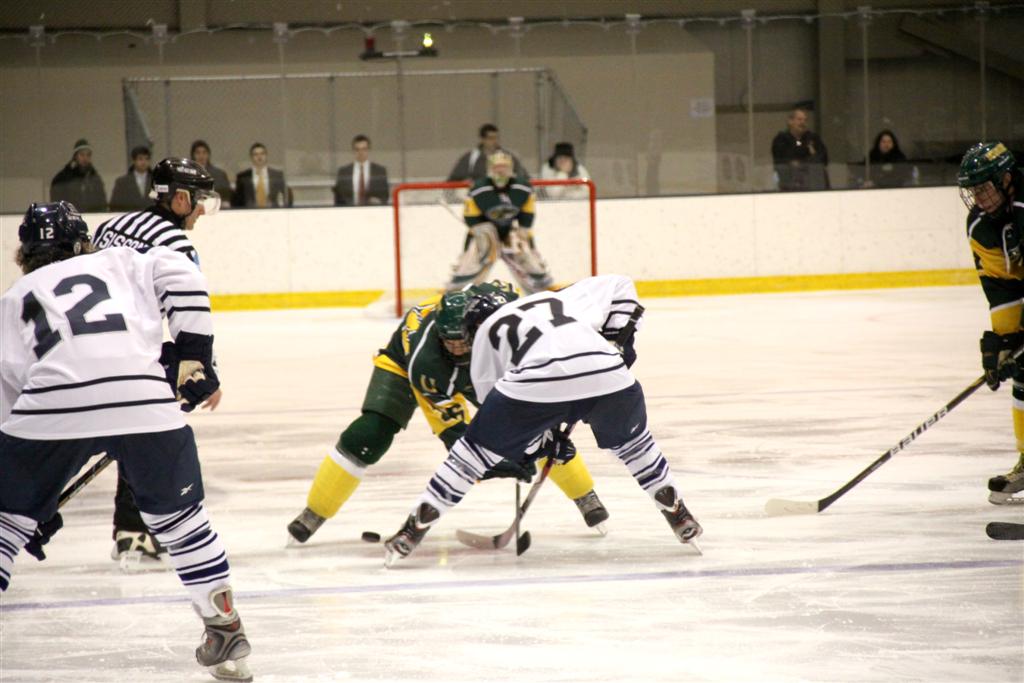 From left: Bryan Sullivan '16 and Joey Agliato '15 battle it out with their opponent on the ice.

The Saint Anselm Men’s Hockey team has had a very positive start to their season, winning five games out of their first eight. They are currently second place in the ECAC East Conference. The team, led by Captains Tucker Mullin, Tim King, and Greg Crovo, has shown that they have not lost their competitive edge over the last year, and have only gained strength as a squad on and off the ice.

The Hawks have reached new levels of success in their program, beating Babson for the first time in eleven years in a solid 3-1 victory. They also had other wins against schools including Mass. Boston and Saint Michael’s College.

The Men’s Hockey team is seeking its eighth conference championship in program history. This would be their fourth consecutive Northeast-10 Conference Championship title. With a 5-2-1 record so far this year, and running currently off a three game winning streak, the Men’s Hockey team is, once again, looking to be a competitive force to be reckoned with for the rest of the season.

This success of the Hawks and the teamwork the players have displayed is due to their hard work ethic and also the camaraderie among the players on and off the ice.

“Great team bonding since day one has added to our success on the ice,” commented sophomore forward Joey Agliato.

The team came together off the ice, even though they experienced unusual setbacks including power outages and other damages to facilities caused by Hurricane Sandy. Games were rescheduled, and the players had to adjust. Judging from the fact that they are currently 3-0 in their last three games, it is clear that the team adapted well to these events and only grew stronger as a program.

Individual leadership from the three captains Tucker Mullin, Tim King, and Greg Crovo has led to a strongly connected team of passionate players who are eager to get the chance at another NE-10 Championship.

Individual efforts have been key to the team’s success. Sophomore Liam Mckillop has scored five goals so far this season including a hat trick against Skidmore, and senior Mike Richards topped the Hawks’ scoring charts with eight goals so far this season. Overall, the Men’s Hockey Program has grown stronger this year and is a formidable force for other teams as they continue their season in search of a fourth consecutive NE-10 Championship.