Hawk football bounces back; squad to play for NE-10 title this weekend 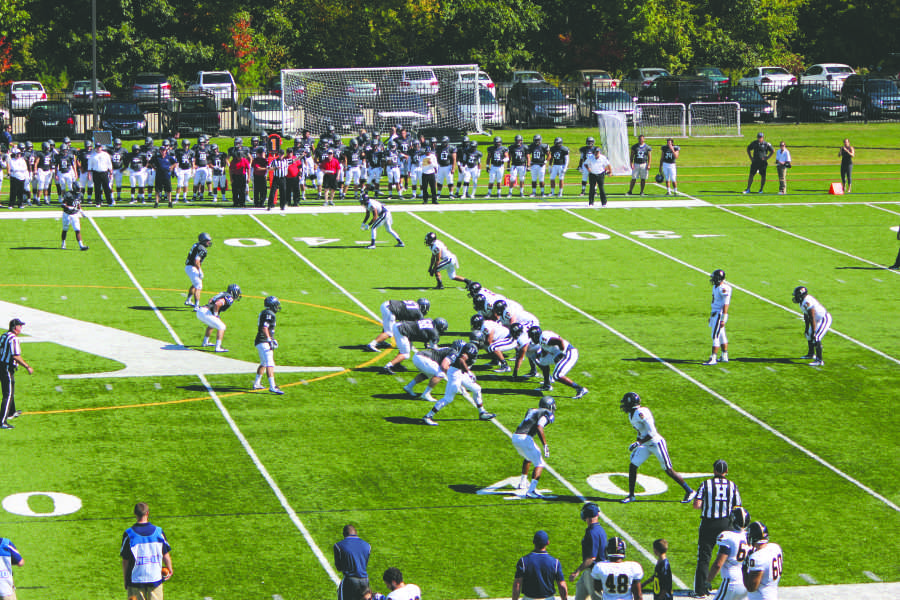 This past Saturday November, 8 the Hawks football team defeated the University of New Haven on the road to earn them the number five seed in the Northeast-10 Conference Championship. They will play Stonehill at home this coming Saturday November 15.

Saturday’s game against New Haven featured a Hawks come from behind win much like the victories the Hawks earned earlier this season. They trailed 21-7 at halftime and in the opening drive of the second half the Hawks offense marched 74 yards down the field in 11 plays to make it a 21-14 game. Later that quarter the Hawks blocked a New Haven punt that was recovered in the end zone resulting in a safety making it a 21-16 game.

In the opening play of the fourth quarter senior wide receiver Brandon Gomes caught what could have been the go ahead touchdown but fumbled the ball in the red zone. The defense was able to recover however and force a punt, which set the Hawks offense up for a drive resulting in a go ahead touchdown making it a 24-21 game.

New Haven responded with another touchdown with 6:14 left in the fourth quarter putting them up by a score of 28-24. Quarterback Yianni Gavalas and the Hawks offense battled back yet again as they went 63 yards in 12 plays to regain the lead yet again. This drive was capped off with a 12 yard touchdown pass to wide receiver Ahkeen Williams on fourth down and 8 yards to go with 2:05 left in the final quarter.

The game was not over yet though as New Haven bounced back to score yet another touchdown putting them on top 34-31 with only 20 seconds left in regulation.

After a crucial personal foul penalty committed by New Haven on the kickoff, the Hawks started the drive with great field position on the 48 yard line. Following an incomplete pass, Yianni Gavalas threw a last second pass caught by Brandon Gomes in the red zone that he ran into the end zone as the time on the clock expired giving the Hawks an improbable 37-34 victory over New Haven.

The next major hurdle for the Hawks to overcome will be this Saturday at home against Stonehill in the first round of the Northeast-10 Conference Championship. St. A’s played Stonehill earlier this season and lost a very close game by a final score of 23-16. It was a game that the Hawks lead early but eventually fell behind by a score of 23-3. As the Hawks have done many times this season, they battled back and were able to cut the deficit to 23-16 but in the end their comeback fell short.

The keys to their success on Saturday will be to avoid turnovers and as they have done several times this season finish the game stronger than they start it. Four of their six wins this season have featured exciting fourth quarter game winning drives. Since their previous game against Stonehill was close, the Hawks fan base can expect another close and exciting game this coming Saturday November 15 at 12 pm at Grappone Stadium. Go Hawks!