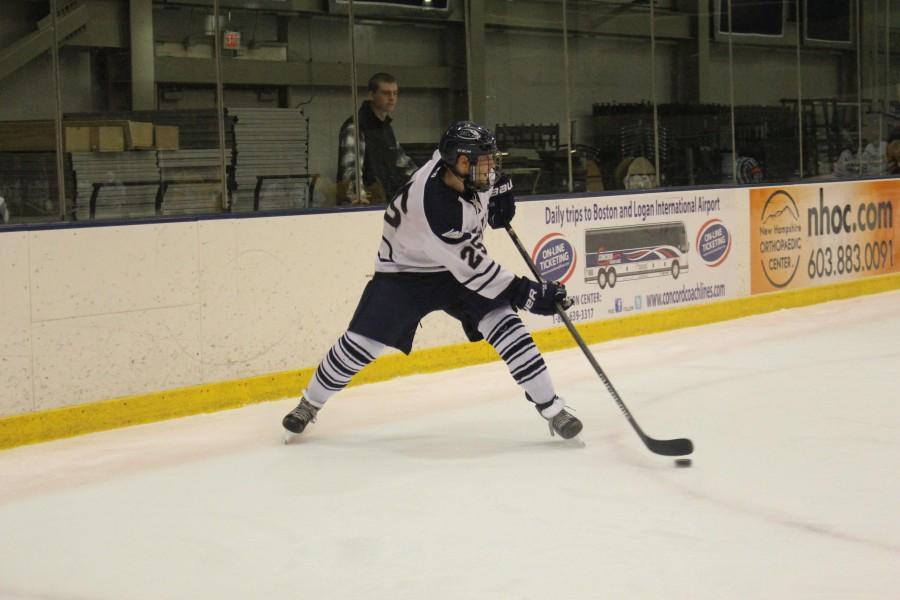 Senior co-alternate captain Vin D'Amato on the ice for the Hawks against SNHU last season.

Men’s ice hockey defeated cross-town rival Southern New Hampshire University on Saturday, Feb. 20 in the Northeast-10 Conference Semifinals. The game was played in front of an energized capacity crowd in Sullivan Arena, with an estimated attendance of over 1,300 people.

Junior Vin D’Amato had a game to remember, scoring 3 goals, earning himself a hat trick, the first of his collegiate career.

D’Amato netted his first goal 18:28 into the opening period. Freshmen Bryan Green and Trevor Kacz assisted on the goal.

Then 8:07 into the second period, junior Brendon Kerrigan sent a backhand pass in front of the net to D’Amato who then scored his second goal of the night. Kerrigan and junior CJ Blaszka recorded assists.

The Hawks took a 2-0 advantage into the second intermission, as that would remain the score until 17:46 into the third period when D’Amato scored an empty net goal after SNHU pulled their goalie. Brendon Kerrigan and senior co-captain Bryan Sullivan assisted on the play. For Kerrigan, it was his second assist of the night.

St. A’s ended up winning by a 3-0 final, advancing to the Northeast-10 Conference Championship. Stonehill defeated Assumption in the other NE-10 Conference Semifinal contest by an 8-4 final. Now the stage is officially set for Saturday, Feb. 27 as the Hawks will travel to Easton, Massachusetts to take on the Stonehill Skyhawks for the NE-10 Title.