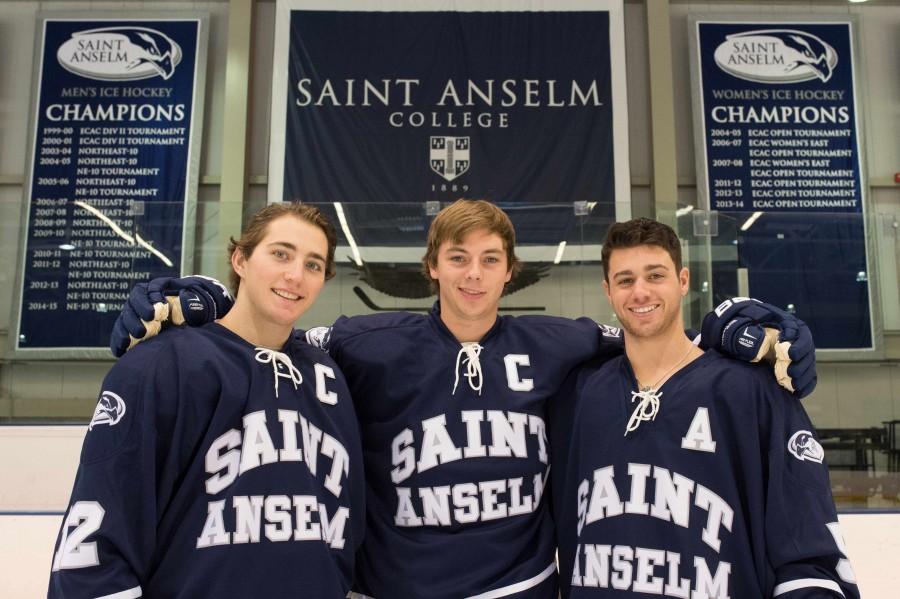 Men’s ice hockey will host Southern New Hampshire University in the Northeast-10 Conference Semifinal this Saturday Feb. 20. The Hawks closed out the 2015-2016 regular season with a record of 11-11-3, 4-1 in the Northeast-10, second best in the conference.

One could argue that a big reason for the Hawks’ success this season is their senior leadership on the ice. While there are only three seniors on the roster, they have been instrumental parts of the team.

“We couldn’t ask for better seniors,” freshman forward Tommy O’Brien told the Crier. “The way they work in practice everyday, they always keep you focused, but at the same time they keep it really loose in the locker room, and they are really easy to get along with and create a great team atmosphere,” O’Brien added.

Senior assistant captain Mark Meads has had a breakout season offensively, scoring 25 of his 42 career points this season. Meads told the Crier “Coming into this year we knew that the seniors had to be driving forces. We lost a lot of guys who had points.” Meads credits his fellow skaters on the ice for enabling him to have offensive success, “those points can’t happen unless the team contributes.”

Much like Meads, senior co-captain Bryan Sullivan has been very productive offensively this season and has scored several clutch goals. Perhaps the most memorable Hawk goal this season was when Sullivan scored 16 seconds into overtime against St. Michael’s College on Jan. 22, earning St. A’s a dramatic 4-3 victory.

Sullivan also praised his teammates when asked about his offensive production. “All of the guys since the start of the year have been contributing with us and helping the team out.” Sullivan also added, “Other guys have been stepping up a lot, it is just easier to produce like we are when we know the other guys are producing.”

Tyler Estee, also a senior co-captain, has lead the Hawks defense this year. A defense which has scored the second most points in the NE-10, and has had success on the penalty kill more than 83 percent of the time. This season, Estee has also served as a mentor to several younger defensemen including freshmen Patrick Horrocks and Trevor Kacz, who have seen a lot of ice time, especially down the stretch this season.

“When I was a freshman, playing with the older guys that I played with and their leadership that they showed me, how they went out every shift and just battled. I try to do that with guys like Patrick [Horrocks] and Trevor Kacz. Just try to show them how hard you have to work to play team defense, and I think our d-core has done a really good job of playing our role, and getting the puck to the forwards,” Estee told the Crier.

Feb. 9 was Senior Night for men’s ice hockey as they honored all three seniors before they played in their final regular season home game for St. A’s. The Hawks played well in front of a packed house that night as they defeated Assumption 5-2. All three of the seniors recorded points in the game. Meads had a goal and 2 assists, and Sullivan and Estee each had 2 assists apiece.

Looking back on the regular season, the Hawks suffered from a few tough losses down the stretch of the season, mostly on the road against teams from the New England Hockey Conference. The road was not friendly to St. A’s this season as they went 4-8-1 away from the Hilltop and were 0-5-1 over their last 5 road games.

In their second to last game of the regular season, St. A’s played at Babson on Feb. 12. The Hawks came out strong to start the contest, as junior Nick Leonard would get them on the board 14:42 into the first period by scoring his seventh goal of the season. Babson would tie the game however in the second period and score two more in the third as they defeated St. A’s 3-1.

The next day, the Hawks traveled to UMass Boston for their regular season finale against the top team in the NEHC. UMass would get off to an explosive start offensively, scoring four goals in the first period to put the Hawks into a tough 4-0 deficit. UMass ended up defeating St. A’s 6-2. A few bright spots in the game for the Hawks included a goal by junior defenseman Peter Sikalis, his sixth of the season (the most by any St. A’s defenseman). Tommy O’Brien also scored his first collegiate goal in the third period of the contest.

O’Brien reflected on the team’s tough losses down the stretch when he said, “Going through adversity, is probably I would say one of the more important parts of the season.” He added in regards to the NE-10 Semifinal against SNHU that “This week we are all really dialed in and focused. Our minds and all our efforts are put towards Saturday and getting a win.” O’Brien believes that “losing those games has prepared us for this weekend, and obviously excitement is at 100 percent.”

The Hawks have faired much better at home this season, posting a 7-3-2 record in the friendly confines of Sullivan Arena. Senior Bryan Sullivan credits a lot of their success at home to the crowd. “The fans made it a lot of fun with the atmosphere. To win at home in front of them is pretty big for us.”

The opening face-off against the SNHU Penmen is set for just after 4 P.M. this Saturday in Sullivan Arena. The Hawks defeated the Penmen earlier this season 3-2 back on Nov. 24. The winner of this Saturday’s contest will advance to the Northeast-10 Conference Final against either Stonehill or Assumption.