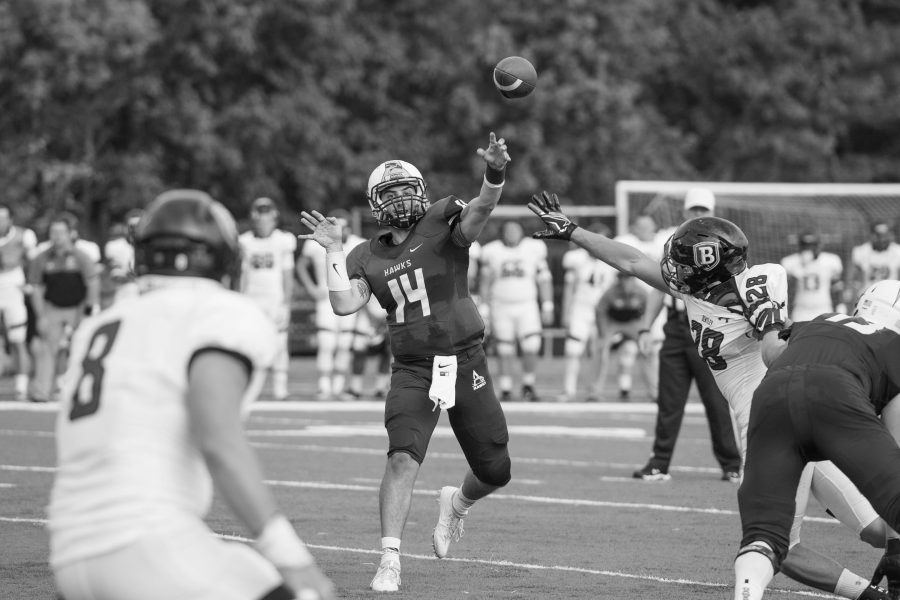 The 2016 fall sports season is now in full swing, and the Saint Anselm football squad is off to a rocky 0-2 start.

They opened their season Sept. 1 on the road in Staten Island, New York against the Wagner College Seahawks, an NCAA Division 1 FCS school.

St. A’s got out to an early lead, as they were up 10-3 midway through the second quarter after a rushing touchdown by senior running back Correy King and a 22-yard field goal by sophomore kicker Daniel Parisi.

Wagner would respond in the latter stages of the second quarter with a touchdown of their own, tying the game at 10 points apiece going into halftime.

The third quarter was fairly uneventful for both offenses as there was no scoring until Wagner secured the go ahead touchdown with 8 seconds left in the frame.

The fourth quarter was when Wagner really took off, as they would score 21 unanswered points, extending their lead to 38-10.

“I was really proud of the way the guys played. Obviously we executed well in the first half, we didn’t execute well in the second half” Joe Adam, the new head coach, said in response to the loss.

“I thought our guys came out, and understanding that we’ve been with our current group for less than 30 days, so we have a whole new offense, new defense, new special teams, so communication, and those types of things, adjustments and checks are part of the learning process.”

Moving forward Adam said:, “Our job is to try to get better at our game. I’ve really challenged the guys about paying attention to details, and focusing on the little things and controlling the controllable, and that starts with attitude, effort and enthusiasm.”

The Hawks had their home opener on Saturday, Sept. 10 when they took on Northeast-10 Conference rival, the Bentley University Falcons, in front of a capacity crowd at Grappone Stadium.

Coach Adam said that the team’s mindset going into this game was “attention to detail. We know we’re playing a very well coached team, a good opponent.”

Bentley struck first blood late in the first quarter when quarterback CJ Scarpa led them down the field with a 16 play, 69-yard drive that resulted in a Falcons touchdown.

The second quarter featured most of the offense for both sides. St. A’s scored the equalizer with 12:48 left in the first half, after a 12 play, 59-yard drive that concluded with a Yianni Gavalas touchdown pass to wide receiver Kyle Hill.

The tie game did not last for long however as Bentley went on to score two rushing touchdowns in a span of less than two minutes, giving the Falcons a 21-7 lead.

The Hawks fired back with 4:12 left in the half as Gavalas and Hill connected for another score, this time an 18-yard touchdown reception, cutting the St. A’s deficit to 21-14.

Each team exchanged three and outs in the next two drives, eventually paving the way for a 6 play 64-yard drive by the Bentley offense that culminated in another Falcons touchdown, extending their lead to 28-14 going into halftime.

Both offenses were much quieter in the second half. There was no scoring until the closing seconds of the third quarter when Bentley tacked on yet another rushing touchdown, this time a quarterback keeper by CJ Scarpa, as the Falcon lead grew to 35-14.

The Hawks would show some life in the fourth quarter. With 10:07 left in regulation, quarterback Yianni Gavalas connected with senior wide receiver Zach Bartak for a 33-yard touchdown reception, making it a two-possession game as Bentley’s lead was trimmed to 14 points.

After the Falcons were forced to punt the ball away with 5:23 remaining in the contest, Yianni Gavalas and the Hawk offense took the field for one last scoring opportunity.

The Hawks were able to convert on third down and six, getting the ball to the 42 yard line, where they would eventually face fourth down and 10. With no other options, St. A’s decided to go for it. Gavalas was intercepted by the Falcons who returned it all the way to the St. A’s goal line where Gavalas himself was able to force a fumble that resulted in a touch back, giving the Hawk offense a second chance at their own 20 yard line

With new life, the Hawk offense again attempted to move down field, however the drive was eventually stalled when Gavalas was sacked for a 13 yard loss by Bentley, sealing the 35-21 victory for the Falcons.

Saint Anselm, now 0-2 on the young season, will look to get back on track on Saturday, Sept. 17 when they go on the road to face the University of New Haven Chargers.