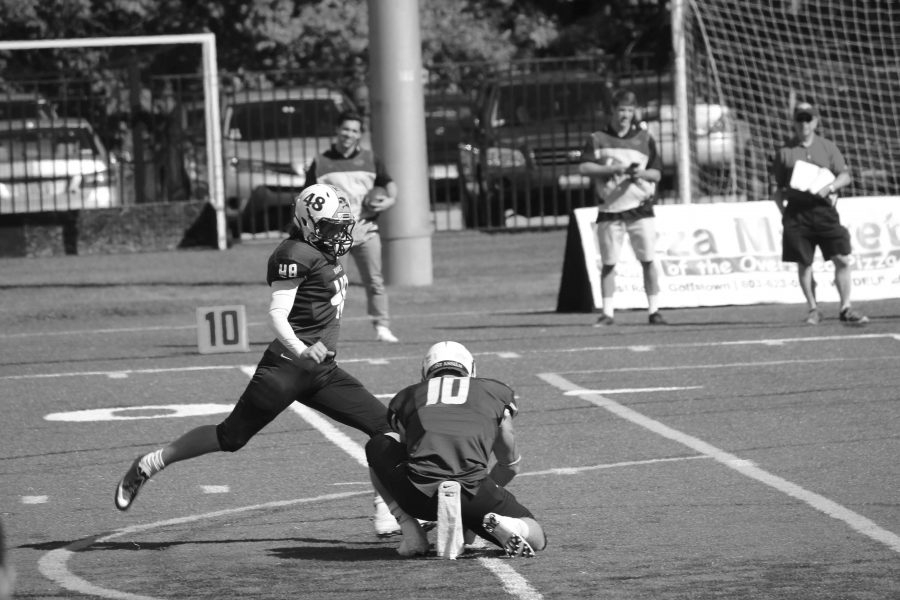 Now four games into the regular season, the Saint Anselm football squad finds itself winless with an 0-4 record.

Despite their slow start, members of the team have said that there has been a significant change in the culture surrounding the St. A’s football program.

“The tides, they are a changing,” senior linebacker Mike Ryan told the Crier.

“Coach [Joe] Adam, and his coaching staff, have come in here and they’ve really preached fighting until the end of the whistle, and to keep going even when the going is not necessarily good. That’s really starting to resonate with the guys on the team,” Ryan added.

This “fighting” mentality was evident on Saturday, Sept. 24 when the Saint Anselm Hawks took on the Stonehill Skyhawks in the “Battle for the Ol’ Bronze Hawk.” There was an estimated attendance of just over 1200 fans at the game according to the Saint Anselm Athletics website.

St. A’s found themselves behind early in this one as they trailed by a score of 17-7 after the first quarter, and were down 24-14 at halftime.

Senior running back Joe Hayman had an explosive first half for the Hawks as he scored two rushing touchdowns, one on a 67-yard run, and the other an 87-yard score.

The Stonehill offense came out strong early in the third quarter as they scored touchdowns in consecutive possessions to take a 38-14 lead.

With their backs against the wall, St. A’s began to chip away at the deficit, as they would score touchdowns in three straight possessions between the end of the third and the beginning of the fourth quarter.

With 5:39 left in the third, senior quarterback Yianni Gavalas connected with sophomore wide receiver Kyle Hill for a 5-yard touchdown. After a successful point after attempt by sophomore Daniel Parisi, the score became 38-21.

Gavalas led the Hawks down the field again, and Saint A’s scored with 34 seconds remaining in the third. Gavalas connected with senior wide receiver Zach Bartak for a 15 yard touchdown reception to cap off the drive. After another good PAT by Parisi, the Stonehill lead shrunk to 38-28.

During the following drive, junior linebacker Eddie Matovu forced a Stonehill fumble, turning the ball back over to St. A’s. The Hawks would capitalize as Gavalas connected with senior Ryan Monette for a 14-yard touchdown, however Parisi would miss his first PAT of the season, as St. A’s made it a 4 point game at 38-34.

In the end, the Hawk comeback would fall short as Stonehill went on to score an insurance touchdown late in the fourth quarter, and held on to win the game by a final score of 45-34.

One positive that came out of the game for St. A’s was that senior wide receiver Zach Bartak ended up with seven receptions in the game, giving him 38 so far on the season, which is the second most in all of Division II football. He is also one of the team’s captains.

Coach Joe Adam describes Zach Bartak as “the ultimate team leader. He is an all in type of person. He’s gone all in with what we are preaching here as a coaching staff, and he’s been rewarded for that in every part of his life, his academic life, his personal life and the things he’s done on the field.”

Senior Joe Hayman also had a big day in the backfield for St. A’s as he recorded 269 rushing yards and two rushing touchdowns.

Standout performers on defense for the Hawks were senior Kyrel Jaundoo and junior Eddie Matovu who each had a forced fumble in the contest.

Adam says “I’ve seen tremendous growth in a number of our players.”

“There are some guys that maybe were on the fence that have gone all in with us, and they aspire to do the things that we ask them to do in everyday life. That’s being early to class, giving great effort, having a great attitude, and representing our football program with a first class integrity. Every day we are trying to get more and more people to go all in,” Adam added.

The Hawks will attempt to improve their record this Saturday at 1PM when they take on American International College during Homecoming weekend.