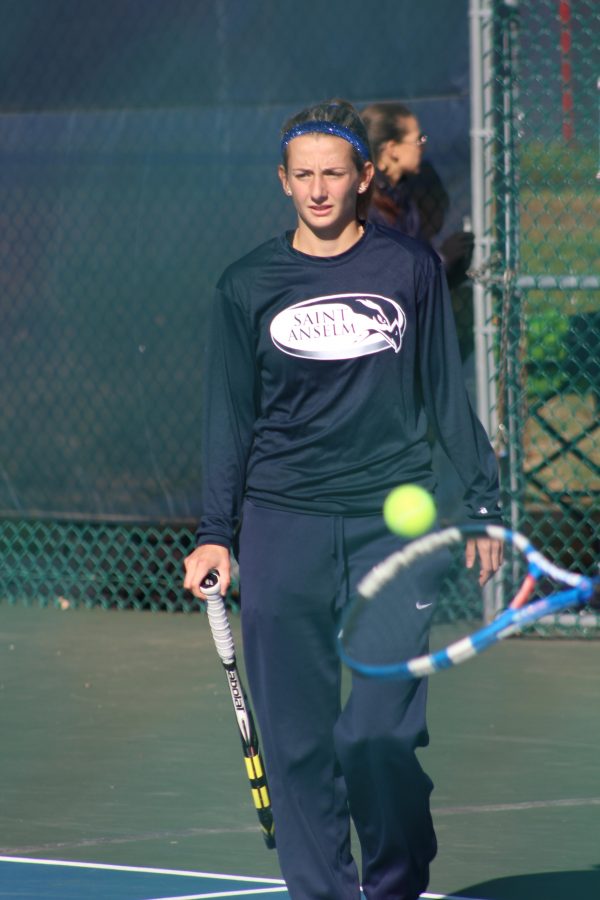 Jess Perkins, the junior captain of the Saint Anselm College tennis team, finished in second place at the Intercollegiate Tennis Association East Region Women’s Tennis Championship. The ITA tournament, which lasted from Sept. 30 to Oct. 4, was hosted by New York Institute of Technology located in East Meadow, New York. She also picked up her second NE-10 Player of the Week Award this year as the Hawks finished with a 7-8 record this season.

Perkins fought her way through an incredibly talented field of athletes to earn a spot in the final match of the ITA competition. Her toughest opposition along the way included matchups against the third, sixth, and second seeds of the tournament. Though she was ranked as number sixteen and “expected to be out in the round of sixteen,” the poised junior defied expectations by battling her way back from a deficit in the third round of competition. After dropping the first set 4-6 to the third seed from NYIT, Perkins took the second set 7-5 and won the tiebreaker 10-4 to advance to the quarterfinals.

After breezing by the sixth seed 7-6, 6-2, she faced a tough matchup against the second seed, Grace Messina from Merrimack College. The Venezuelan is responsible for three of Perkins’ seven career losses as a Hawk, but she was no match for the determination and technique that Perkins displayed as she cruised to a 6-3, 6-3 victory.

“I really wanted to win that one,” she explained. “She’s a really good player… it felt good to get the win in a high-quality match.”

Later that same day, the four seed Gabriela Siembab edged Perkins in a tough 6-2, 6-4 championship match. The Hawks captain was proud of her second-place finish as she “played some of [her] best tennis” against a slew of talented and diverse competition. She was forced to modify her approach and delve deep into her extensive knowledge of the sport in order to outclass competitors that were taller, more powerful, or quicker than her. Time and time again Perkins proved why she was the number one on the Saint Anselm team through her “smart tennis” and impressive tactical skill.

For an added obstacle during the competition, Perkins traveled to the tournament as the sole representative of Saint Anselm. Usually, an athlete competes alongside teammates that provide support and motivation either on the court or by cheering from the stands. The captain “really missed” her fellow tennis players, but she embraced the challenge and experience of “connecting with everyone from the other schools.”

By competing as an individual, she was able to meet several new players from different schools, which provided a rare opportunity for intercollegiate camaraderie despite the fierce competition.

Perkins credits her coach for being integral to her success in the tournament. “Coach was my rock over the weekend,” the student athlete explained. As a nursing major, Perkins was “stressed” about missing extensive school time due to the length of the tournament. Coach Driscoll was able to keep her “anchored” and focused on the competition.

After the ICA tournament, Perkins returned to team competition the next day. Over the last five matches, she has eight of her nine doubles and singles matches, blowing away the competition and leading the Hawks on a playoff charge that fell just short, with Saint Anselm finishing in eighth place in the NE-10 conference.