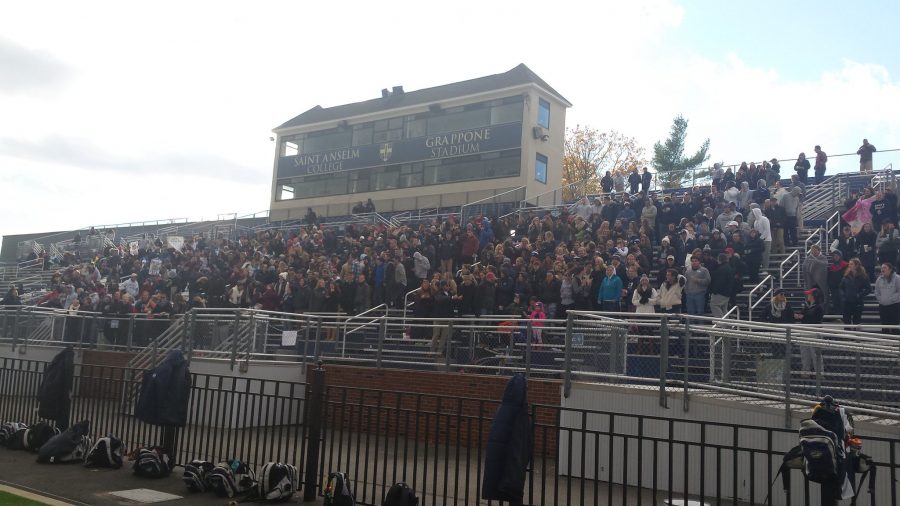 The NCAA announced the six-team tournament bracket at 3 p.m. on Monday, Nov. 7.

The Hawks will host Northeast-10 Conference rival Stonehill at 1 p.m. on Saturday, Nov. 12 in the opening round of tournament play. Saint Anselm defeated Stonehill earlier this season 3-1 on Oct. 12.

Saint Anselm fell to the LIU Post Pioneers 2-1 on Sunday, Nov. 6 in a thrilling overtime decision for the Northeast-10 Conference Championship.

For Hawk field hockey, this was the program’s first ever appearance to the NE-10 Finals after defeating Merrimack College 1-0 in the semifinals on Nov. 4.

Saint Anselm hosted the conference championship game, and there was an estimated attendance of nearly 500 fans.

“I have never seen Grappone [Stadium] like that in my four years here,” senior Rose Mooney, a captain on Hawk field hockey, told The Crier.

“The parents have always been dedicated fans all season long, traveling to Pennsylvania and New York with us on the long weekends, but [the NE-10 Title game] was exceptionally special because of the student support and general support from the Saint Anselm community,” Mooney continued.

It was a tight game throughout in the battle for the conference title. The Pioneers would strike first blood when Steph Mocerino scored an unassisted goal 16:29 into the contest. For Mocerino, it was her sixth goal of the season.

Both teams played well defensively, as that was the only score until right before the end of regulation.

With only seconds remaining on the clock, the Hawks were able to force a penalty corner. Saint Anselm wisely let time run out on the clock as junior Erin Collins passed the ball to senior Rose Mooney who scored to tie it up 1-1 with the game clock displaying 0:00.

This meant that it would take a sudden death overtime period to crown the Northeast-10 Conference Champions.

The Pioneers however were able to get the ball to their leading scorer Emily Miller just under two minutes into overtime as she scored her nineteenth goal of the season, securing the NE-10 crown for LIU Post.

When asked what it was like to score the tying goal to force overtime, Mooney said, “I should’ve scored that goal 3 different times earlier in the game. I’m happy I finally got it done, but it’s because my team had faith to give me another chance. I’ll remember that one for a long time.”

For their efforts to force the extra frame, both Rose Mooney and Erin Collins were named to the Northeast-10 Conference All-Championship Team in a ceremony on the field after the game.

Mooney told The Crier “I’ve never been a part of a team that works so hard for one common goal.”

“This year we really wanted to prove to people that we were a different team than previous years; we are stronger and more competitive and capable of winning major titles,” Mooney continued.

In regard to their bid into the NCAA playoffs, Mooney said, “We still have some unfinished business to take care of. We still have a lot to prove!”