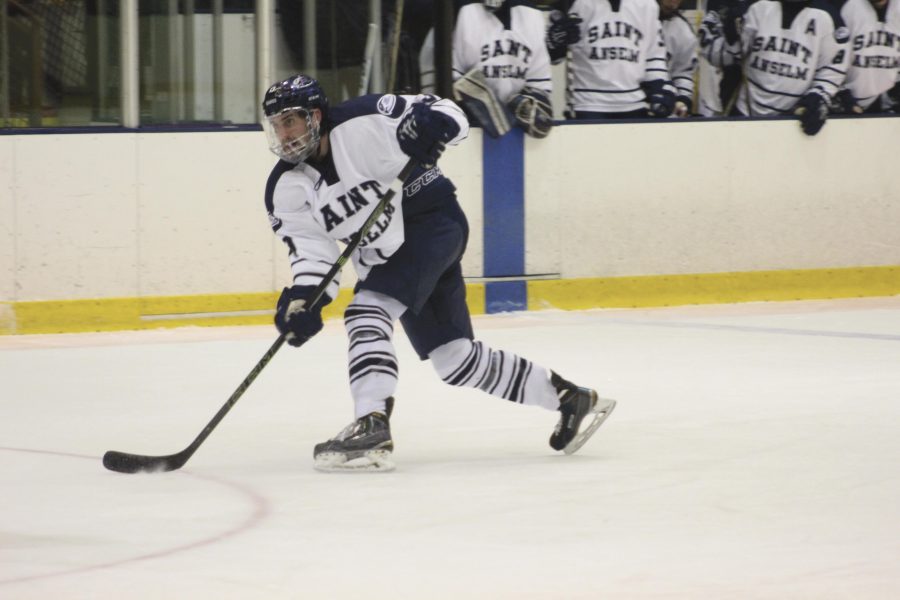 Sophomore Trevor Kacz taking a wrist shot in a game versus Norwich Nov. 11.

The 2016 Saint Anselm men’s ice hockey season is underway. They have posted a 3-3 record, and have had their ups and downs thus far to begin play.

All three of the team’s losses have come against New England Hockey Conference opponents, however they have a 2-0 record within the Northeast-10 Conference after defeating the Saint Michael’s College Purple Knights 4-0 on Saturday, Nov. 12 and the Stonehill College Skyhawks 7-2 on Wednesday, Nov. 16.

The Hawks’ season began on the road with three consecutive away games, starting with NEHC rivals Castleton on Nov. 4 and Skidmore on Nov. 5. Saint Anselm ended up dropping both contests 5-3 and 4-0 respectively.

Next the squad played at home in their opening weekend at Sullivan Arena as they hosted the Norwich Academy Cadets on Nov. 11. There was an estimated attendance of 1150 people on hand.

“There’s really nothing better,” senior captain Lawrence Taylor said in regards to playing in front of a capacity crowd at home.

“All you can do is smile and just get excited for the game. We definitely want to thank all of the fans,” Taylor continued.

It was a close contest throughout as neither team scored until 16:18 into the second period when Tyler Piacentini netted a goal for the visiting Cadets, giving them a 1-0 advantage. Norwich tacked on an insurance goal midway through the third period when Alec Brandrup scored on a power play. Kevin Salvucci and Tyler Piacentini assisted on the play, as the Cadets extended their lead. Norwich went on to defeat Saint Anselm by a 2-0 final.

The Hawks bounced back on Saturday, Nov. 12 against NE-10 rival Saint Michael’s, as the offense came to life.

After a scoreless opening frame, Saint Anselm came out strong to start the second. Senior Nick Leonard scored a short-handed goal 2:13 into the period, and sophomore Jeremy Carignan assisted on the play.

The Hawks piled on in the third period, adding a goal by freshman Trey Aiello 3:02 into the frame. Freshman Dave Almeida and junior Justin Longo recorded assists on the play. Senior co-alternate captain Brendon Kerrigan kept the Hawk offense rolling when he scored a short-handed empty net goal 12:21 into the period, extending their lead to 4-0. Senior defenders Lawrence Taylor and Peter Sikalis assisted on the play. Saint Anselm went on to defeat Saint Michael’s 4-0.

Hawk goaltender Shane Joyce had a busy weekend between the posts. The junior recorded 44 saves, and only allowed two goals against Norwich, and he did not allow any goals and tallied 24 saves against Saint Michael’s. For his efforts, Joyce was awarded both the Northeast-10 Conference and New England Hockey Conference Goaltender of the Week awards. Both recognitions were announced on Monday, Nov. 14.

Taylor told The Crier moving forward the team has to “focus on the Northeast-10 [Conference] games more than anything.”

Taylor said that defeating Saint Michael’s was “a big win” because the team’s overall record against NE-10 opponents will affect their seeding going into the conference playoffs after the conclusion of the regular season.

Saint Anselm has been a perennial contender for the Northeast-10 Conference Championship. Last season they were in line to play Stonehill College in the conference title game, however the contest was postponed after several Hawk men’s ice hockey players came down with confirmed cases of the mumps just days before the game.

Saint Anselm, Stonehill, and the conference were unable to agree on a make up date, so the championship game was subsequently canceled, and Stonehill was named champions by default because they had the higher seed in the playoffs.

The two teams played on Wednesday, Nov. 16 for the first time since the canceled title game.

“There’s definitely a chip on our shoulder walking into this game,” Taylor told The Crier earlier that week.

“Knowing that it’s a Northeast-10 game that we have to win, and on top of last year’s championship situation, definitely a lot of motivation going into the game,” Taylor continued.

The two teams were held scoreless in the first period despite Saint Anselm going on the power play on four separate occasions.

After Stonehill opened the scoring with a goal just over three minutes into the second period, the Hawk offense exploded, scoring four goals in a span of just under three minutes of play. Freshman Trey Aiello netted the first Saint Anselm goal 6:28 into the frame, and senior Nick Leonard and sophomore Patrick Horrocks assisted on the play. For Aiello, it was his third goal in his last four games.

Just over a minute later, at 7:49 into the period, sophomore Jeremy Carignan scored a power play goal to give the Hawks a 2-1 lead. Junior Jon Pallotta recorded an assist on the goal. Saint Anselm tacked on another at 8:29 into the second when senior co-alternate captain Vin D’Amato scored another power play goal to make it 3-1. Jeremy Carignan and senior co-alternate captain Brendon Kerrigan assisted.

Lawrence Taylor added a fourth goal at 9:12 into the period for the Hawks, with sophomores Brian Cameron and Ryan Loranger earning assists as the Hawks would take a 4-1 lead into the second intermission.

Stonehill would again open the scoring with a goal 5:48 into the third period. However, the Hawks would put the game out of reach as they responded by scoring three more goals in the final frame. Jeremy Carignan scored the first one at 11:36 into the period with Jon Pallotta and Nick Leonard recording the assists. For Carignan, it was his second goal of the game.

Vin D’Amato went on to score his second power play goal of the game for the Hawks at 13:57 into the period with seniors Brendon Kerrigan and CJ Blaszka earning the assists. Senior Peter Sikalis added the final score of the game for Saint Anselm, a power play goal at 19:24 into the third. Kerrigan and Blaszka recorded assists for the second consecutive goal as the Hawks won 7-2.

The biggest key in the game for Saint Anselm was that they went four for six on the power play in the second and third periods after going scoreless in four power play opportunities in the opening period.

Shane Joyce, coming off his NE-10 and NEHC Goaltender of the Week honors, also had a clean game in the net for Saint Anselm, as he recorded 25 saves and only allowed two goals. He now ranks second among NE-10 goaltenders with a .936 save percentage so far this season.

The Hawks won’t return to action again until after Thanksgiving when they play on the road against the Southern New Hampshire University Penmen on Tuesday, Nov. 29.