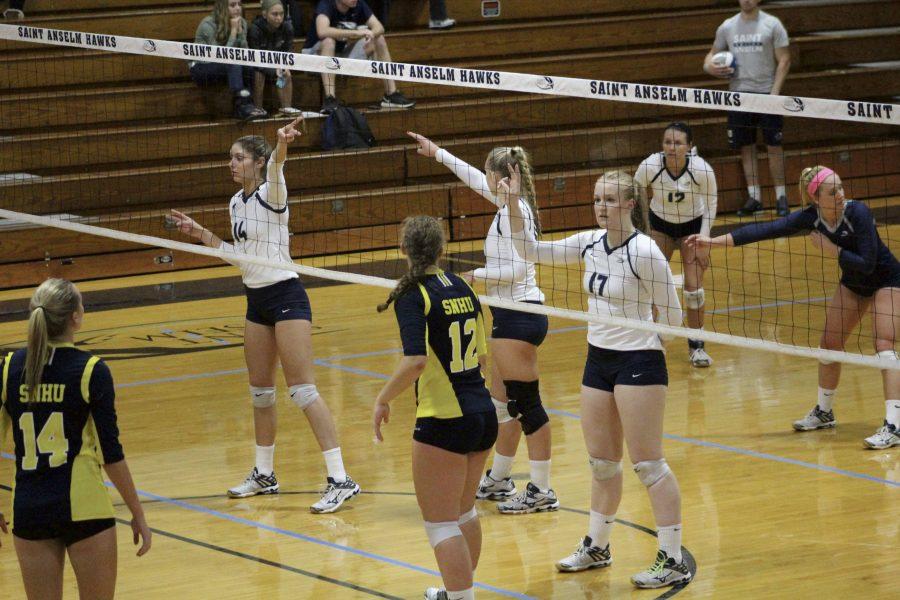 Jewel Hayes and the Hawks volleyball team lost in the opening round of the NE-10 playoffs to Adelphi University on Nov. 15. The squad finished with a 20-8 mark overall this season and a 10-4 conference record. This was the program’s first playoff appearance since 2003.

Over the month of November the Hawks have played five matches, winning two and dropping three. After nine consecutive away matches, the Hawks were ready to return home for the final three matches of their regular season. The volleyball team started their home defense against Stonehill College, a tough matchup that went to the Skyhawks in five sets.

“The first two sets were not us at all,” Hayes explained. She described their opening play as “timid” throughout the first and second sets, which the Hawks dropped 20-25 and 16-25, respectively.

Hayes credits her assistant coach Maggie Kenney with sparking their third and fourth set comeback efforts. “She told us we need to have fun,” the sophomore said. “We play our best volleyball when we have fun.” They won their next two sets 25-23 and 25-14 before dropping the final set, 10-15.

The volleyball team won against Saint Rose on Friday in another five set match. They were led on the attack by freshman Madison Sollows, who tallied 15 kills and 2 service aces. Hayes racked up 43 assists, and senior captain CC Chrisom led the team defensively with 20 digs.

Hayes was quick to praise the contributions of Sollows and her other first-year teammates. “We would not be the same team without our freshman,” the setter stated. The team retained much of their talent after last season, only losing one player to graduation. But the added depth provided by the strength and prowess of the new players will “help [the team] in the playoffs,” according to Hayes. She explained that when other teams begin to tire and play poorly, the Hawks have the ability to make substitutions with players of equal talent to their starting lineup.

Last Saturday Saint A’s finished their regular season with a home tilt against Le Moyne College. Hayes said that the match was ‘crucial,’ as it would determine which school would win the division and have home advantage throughout the NE-10 playoffs. Despite valiant efforts from junior Amanda Williams, who totaled 10 kills, and Hayes, who recorded 28 assists, the Hawks fell to the Dolphins in four sets.

Over the last three games, Hayes moved into fifth on the all-time record for career assists at Saint Anselm College. Over her two years as a setter for the Hawks, she has totaled 1,597 assists.

When asked about her record-setting achievement, Hayes stated that she has always “wanted to be one of the key players” of the volleyball program. Her positional prowess and surgical precision as a setter have helped catapult the Hawks to their first playoff run since 2003.

At the beginning of the season, the program goal for the team was to make it to the playoffs. Now that they have guaranteed a berth, that goal has changed. “Let’s win the tournament,” Hayes asserted confidently.

The Hawks lost 3-1 to the Panthers of Adelphi in Stoutenburgh Gymnasium in the quarterfinals of the NE-10 playoffs and their season has now come to an abrupt end.