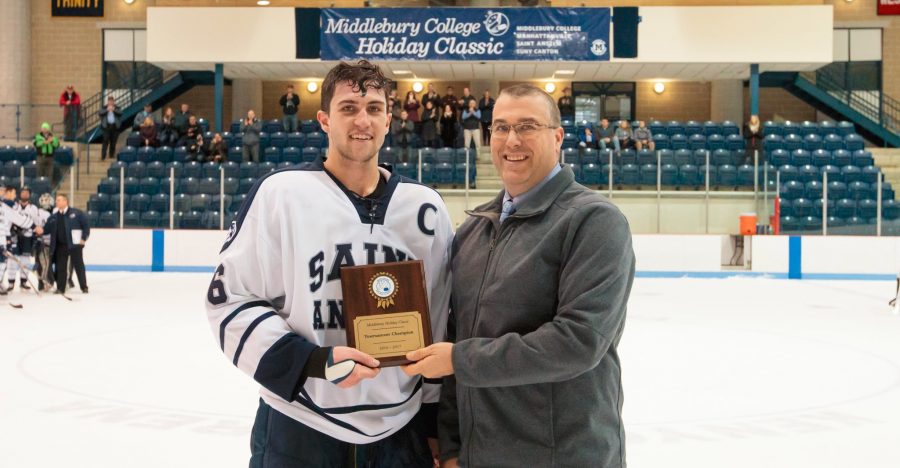 It all began on Dec. 30 when Saint Anselm defeated Middlebury in a shootout in game 1 of the tournament. The Hawks trailed 3-0 early in the third period, but scored three unanswered goals to tie the game and force overtime. Junior Nick Gorski, senior Nick Leonard and senior co-alternate captain Vin D’Amato scored the three St. A’s goals. For Gorski, it was the first goal of his collegiate career.

After two scoreless overtime periods, the game went into a shootout where senior co-alternate captain Brendon Kerrigan scored on the Hawks’ second attempt, which turned out to be the game winner. Junior Shane Joyce did the goaltending for the Hawks, and recorded 19 saves during regulation and added two more key saves during the shootout.

Officially in the standings, the game counts as a tie because there was not a decision until after the first overtime period, which would have been the end of the game. For the purposes of the tournament, both teams played in a second overtime period and a shootout.

Next up for the Hawks was Manhattanville on Dec. 31, who defeated SUNY Canton in the opening round of the Holiday Classic 4-1. The winner of the contest would be crowned tournament champions.

For the second game in a row, the Hawks found themselves behind in the third period.

Saint Anselm was down 1-0, but about four minutes into the final frame, senior co-alternate captain Vin D’Amato netted the tying goal for the second straight game, knotting the score up at 1 apiece. Seniors CJ Blaszka and captain Lawrence Taylor IV assisted on the goal.

Then six minutes later, freshman Mike Ferraro scored the game winner, assisted by seniors Peter Sikalis and co-alternate captain Brendon Kerrigan, as the Hawks went on to win by a final score of 2-1.

Shane Joyce had the night off for the Hawks after goaltending two overtime periods and a shootout the night before. Sophomore Colin Soucy filled in for Saint Anselm between the posts and recorded 26 saves, only allowing one goal over 60 minutes of play.

After the game, the Hawks were presented the Middlebury Holiday Classic Championship plaque in a ceremony at center ice. Saint Anselm’s Peter Sikalis was named Tournament MVP, and Brendon Kerrigan and Jeremy Carignan were named to the All-Tournament Team.

Following his performance against Manhattanville, Colin Soucy was named New England Hockey Conference Goaltender of the Week on Monday, Jan. 2.

Taylor told The Crier “it is a great feeling to come from behind in both games” and that it showed “our team’s resilience.”

One of the major positives he saw this past weekend was that “we never gave up and we supported one another especially when we were weathering storms.”

However, Taylor added that a negative was that they allowed the other teams to “get up on us early. We may not always be able to come from behind.”

Taylor also said that the tournament title could give the team momentum going into their upcoming games, but “only to a certain extent, every game we play is different. We need a good week of practices.”

Men’s ice hockey will be back in action on Jan. 6 when they take on New England Hockey Conference rival UMass Boston on the road at 7 p.m.

This article was updated on Jan. 2 following Colin Soucy being named NEHC Goaltender of the Week.