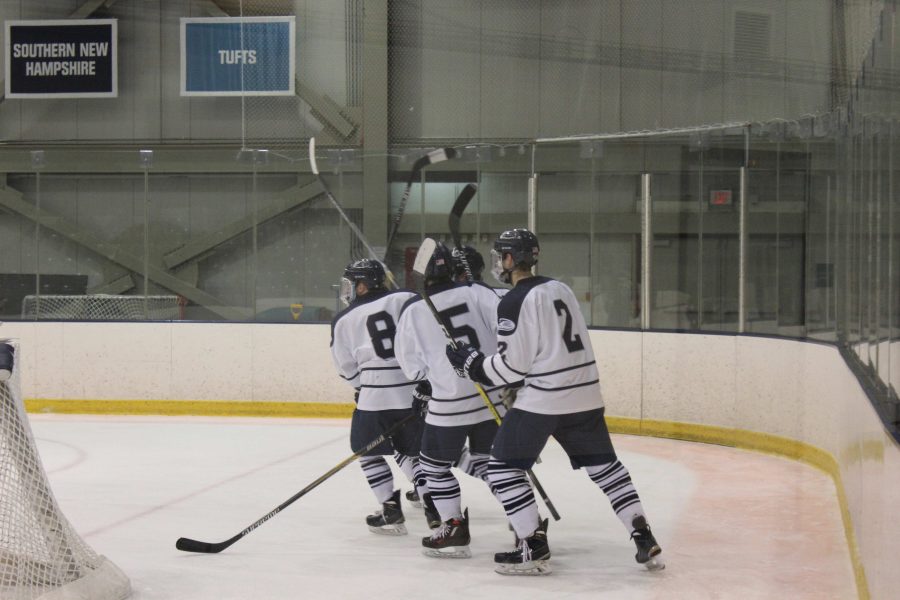 Brendon Kerrigan, Joey Harrington, Dave Almeida on the ice in the Hawks victory.

With only six regular season games remaining, Saint Anselm men’s ice hockey will look to finish strong heading into the Northeast-10 Conference playoffs. They are currently 9-8-2 overall, but more importantly 3-1 in the NE-10, good for first place in the conference.

The Hawks have faced some adversity of late, suffering a few tough losses and a tie to New England Hockey Conference opponents. They are 2-2-1 in their last five games.

The Hawks hit the ice again the next day for another NEHC matchup against Castleton. For the second straight game, Saint Anselm went to overtime, however this time the Hawks lost 3-2. Saint Anselm fell behind 2-0 early, but came back in the third period, scoring twice to tie the game 2-2. Freshman Trey Aiello scored the first Saint Anselm goal 8:39 into the third, and sophomore Jeremy Carignan and senior Nick Leonard assisted on the play. Then with less than two minutes remaining in regulation, sophomore Bryan Green scored his first goal of the season, and was assisted by Brian Cameron.

The contest went into overtime, and remained tied until Castleton scored the game-winning goal with 31 seconds left on the clock.

On Tuesday, Jan. 17 the Hawks took a break from NEHC play when they hosted NE-10 rival Franklin Pierce. Saint Anselm fell behind early after Franklin Pierce scored the first goal of the game 3:52 into the first period. The Hawks responded when Bryan Green scored his second goal of the season at 9:14 into the second period. Brian Cameron and senior co-alternate captain Brendon Kerrigan assisted on the play.

Franklin Pierce regained the lead just over midway through the second period, putting the Hawks into a 2-1 deficit. Saint Anselm responded 8:45 into the third period when Brian Cameron scored his second goal of the season, and Bryan Green recorded the assist.

With the score again tied at the end of regulation, Saint Anselm headed to overtime for the third game in a row. The two teams traded a few shots on goal, but it would prove to be Bryan Green’s night as he netted the game winning goal 1:57 into overtime, giving the Hawks a 3-2 victory. Once again, his line mate Brian Cameron assisted on the goal.

Afterwards, Green told The Crier that it was “good to finally get an OT win” after three straight overtime games. “Three long games,” Green continued.

Next up for Saint Anselm was a two game weekend road trip in Vermont. It began on Friday, Jan. 20 against Saint Michael’s; a game the Hawks won 2-1. Saint Anselm scored both goals in the second period. Senior Nick Leonard netted the first goal 12:58 into the frame with freshman Trey Aiello and sophomore Jeremy Carignan recording assists. Just over four minutes later at 17:09, Carignan scored the second Hawk goal, this time with Nick Leonard and junior Jon Pallotta assisting.

Saint Anselm sophomore Colin Soucy nearly shutout Saint Michael’s in net, and did not allow a goal until the final 18 seconds of the game.

The next day, the Hawks played at Norwich, who were ranked second among all NCAA Division III hockey teams. It was a tough game for Saint Anselm as they fell to Norwich 6-1. Different skaters scored all six of the Norwich goals, and they nearly shutout the Hawks until Bryan Green scored the lone Saint Anselm goal with just over a minute and a half left to play. Jon Pallotta recorded an assist.

After tallying three goals and an assist over the team’s last three games, including the game-winning goal against Franklin Pierce, Green was named Northeast-10 Conference Player of the Week on Jan. 23.

Overall this season, that Hawks have gotten contributions from a lot of players, and some of the freshmen in particular have played big roles.

“It’s good to see the young guys step up and buy into the game plan,” Green told The Crier.

Ferraro has also scored two game winning goals this season, the first coming against Manhattanville on Dec. 31, and the second against Babson on Jan. 7.

With the team now atop the Northeast-10, they are beginning to look towards the conference postseason, and they are excited about the potential of hosting a playoff game.

Saint Anselm will continue play on the road on Jan. 28 at New England College and Feb. 3 at Assumption before closing out the regular season with four straight home games against Southern Maine, Daniel Webster, Babson and UMass Boston.