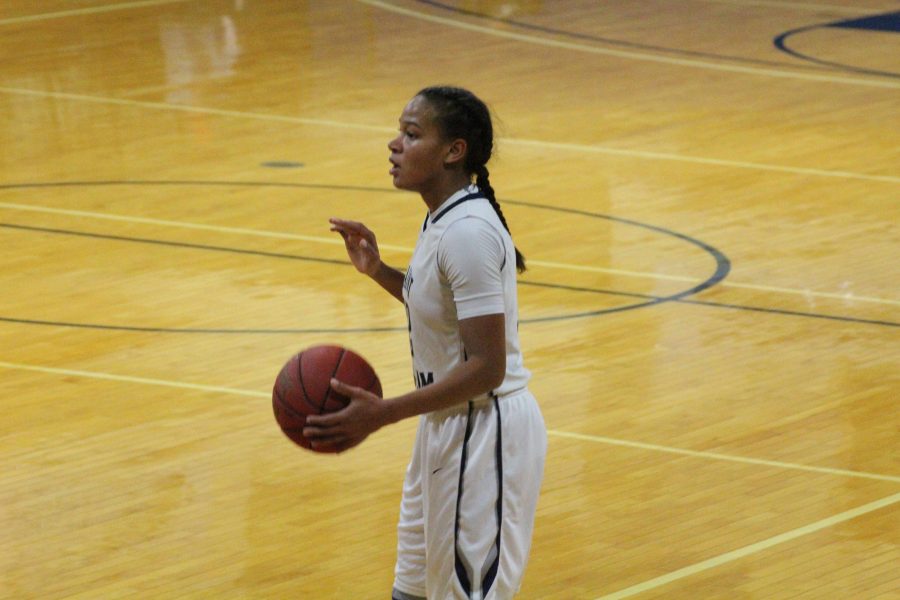 Senior Candace Andrews on the court for the Hawks.

The Saint Anselm women’s basketball team has opened the second half of their season at a blistering pace, winning five of their last seven games. Improving to 12-7 overall and 7-6 in conference, the team currently sits at fourth in the Northeast Division of the NE10. Captain Caitlyn Abela and the Hawks are firing on all cylinders with one eye on the playoffs as they finish the last two months of their season.

The team rang in the New Year on Jan. 4 with a statement victory over Pace University. Led by a double-double of 13 points and 13 rebounds from senior Kaila Duarte, the Hawks thrashed the Setters 76-60. The women controlled the game after the five-minute marker in the first quarter, where they went up 8-5 and never surrendered the lead. Notably, 10 different players scored at least one point as they dismantled Pace with an impressive team effort.

Abela, a senior guard, credits her team for “playing with a lot of heart.” The natural science major is “proud” of the way her team has been playing in the second half of their season. She credits her teammates for “peaking at the right time [by] playing physically, composed, and confidently.”

That composure and confidence shone through when the Hawks capped off their last match with a brilliant, last-second finish against American International College. The team struggled early against AIC, trailing by as much as 16 points. “[We] fought as hard as we could to get back in the game,” according to Abela. The Hawks trailed the Yellow Jackets 51-46 with four minutes remaining when seniors Abela and Candace Andrews stepped up. The duo combined for six unanswered points and the lead until AIC swung the game back in their favor after a layup by guard Alyssa Guyon. With 4.2 seconds remaining, Andrews coolly drained a jump shot to secure a 54-53 victory for the Hawks, a feat Abela described as a “clutch play.” Andrews finished the game with 18 points, and eight assists, while Abela contributed 13 points and six rebounds. Their triumph at home extended the Hawk’s win streak to four consecutive games.

The basketball team is definitely hitting their stride at the right time, with a month left in their regular season and the beginning of playoffs. Abela said that it is “extremely important” for her team to play “peak basketball” at this point in their 2016-17 campaign. “We are hungry to make playoffs, and the way we are playing shows our determination,” she reflected.

Although they started this season with a “blank slate,” the Hawks are seeking to avenge an early exit from the NE10 playoffs last year. Last season they lost their first game of the tournament in a quarterfinal tilt against New Haven, the only blot on an otherwise stellar season. According to Abela, that early loss is “fueling our fire to make it further this year.”

As only the top five teams in each highly competitive division qualify for the tournament, the Hawks will need to “be ready to play against any and every opponent,” according to the senior. They will need to rely on the continued leadership of Abela and her fellow upperclassmen in order to secure a playoff berth late in the season. The Hawks played at Adelphi on Jan. 24, but lost by a 55-47 final score.