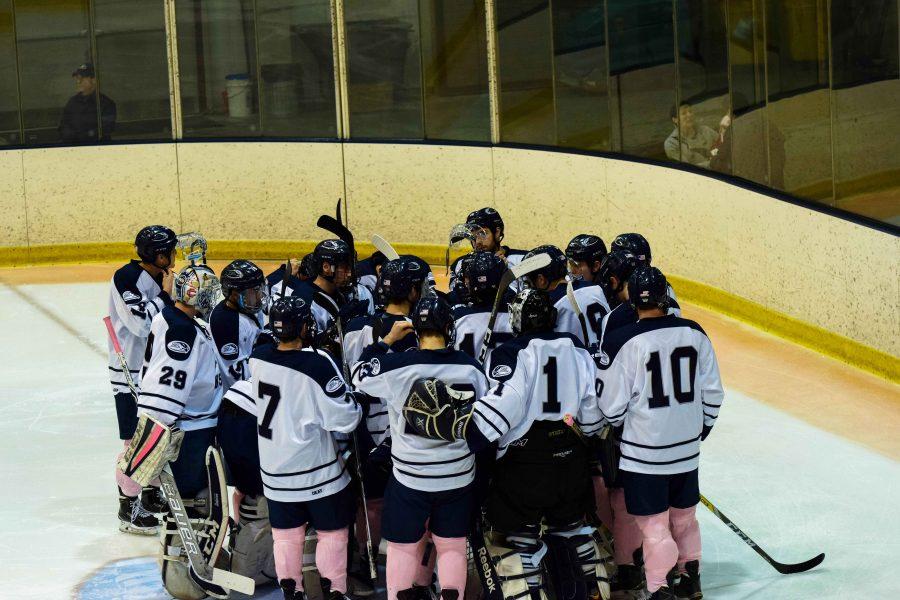 Saint Anselm Hawks huddle together as a team.

Saint Anselm men’s hockey has secured a share of the Northeast-10 Conference regular season title and home ice advantage throughout the conference playoffs. They are now 11-10-2 overall, but more importantly 4-1 in the NE10.

The team clinched a share of the NE10 regular season crown after defeating Assumption 4-0 on Jan. 31. Four different players scored in the game for Saint Anselm, including junior Antonio Marini and freshman Sean Verrier, who each netted their first career goals. Senior captain Lawrence Taylor IV added a goal and an assist, and senior co-alternate captain Brendon Kerrigan tallied a goal as well.

The win was also the 200th career victory for Ed Seney, who is in his 15th season as head coach of Hawk hockey. He currently has the most wins of any coach in team history.

Afterwards Coach Seney told The Crier that winning his 200th game was “a nice accomplishment,” but that it was more about the players, and the fact that they clinched home ice advantage in the conference playoffs.

“The senior class has won the NE10 Championship once, and this is their last shot at it and it is in our hands.”

The contest on Jan. 31 against Assumption was the Hawks’ final NE10 regular season game of the year.

They returned to the ice for their first of their last four New England Hockey Conference games on Feb. 3 when they hosted Southern Maine. As The Crier reported in October of 2016, Saint Anselm’s agreement with the NEHC expires after this season, and the Hawks will no longer be affiliated with the conference.

Saint Anselm was in control for the first 59 minutes of the game, and was up 3-1 late in the third period. Freshman Trey Aiello scored his ninth goal of the season in the first period, and was assisted by freshman Jake Grade who recorded his first career point. Senior Peter Sikalis added two goals early on in the third, giving the Hawks a two goal lead.

However, with only one minute left in regulation, everything changed in the span of 23 seconds as Southern Maine hit the back of the net twice to tie the score 3-3. The game continued into overtime and ended 48 seconds into the extra frame when Southern Maine netted the game winner, capping off a dramatic 4-3 victory.

The Hawks bounced back the following day however when they hosted Daniel Webster, another NEHC rival. The Hawks got off to strong 4-0 lead in the first period and added a fifth tally in the second, as they went on to shutout Daniel Webster 5-0.

Junior goaltender Shane Joyce rebounded between the posts for the Hawks, shutting out Daniel Webster after giving up three goals in the final two minutes of play the night before. With a commanding 5-0 lead, Joyce was relieved by junior goaltender Brenden Cain late in the third period, who went on to play the last 6:20.

On Feb. 6 Joyce was named NE10 “Goaltender of the Week” for the third time this season, and ninth time in his three years playing for the Hawks.

Moving forward, Coach Seney told The Crier one of the keys to the Hawks’ success is to “take the play right to [the opponent]” and that it is important to “come out strong and play a full 60 minutes.”

He specifically cited the importance of taking control offensively in the first period, as the Hawks did against Daniel Webster, jumping out to a 4-0 lead in the opening frame.

Seney also said that the team’s penalty kill has been a strength this season, but that their power play percentage could improve.

The Hawk’s currently rank first in the NE10 and second in the NEHC in penalty kill, however they are currently last in the NEHC on the power play, scoring only 18.9 percent of the time when they have a one or two man advantage.

The Hawks wrap up the regular season this coming weekend when they host Babson on Feb. 10 at 7 p.m. and UMass Boston on Feb. 11. at 4 p.m.

Feb. 11 will also be “Senior Day” as the team will be honoring their six seniors (Brendon Kerrigan, Nick Leonard, CJ Blaszka, Peter Sikalis, Vin D’Amato, and Lawrence Taylor IV) in a ceremony before the game.

After the conclusion of the regular season, the Hawks will host the NE10 semifinals on Feb. 18. Their opponent is still to be announced, and the winner will advance to the conference finals, which is scheduled for Feb. 25.