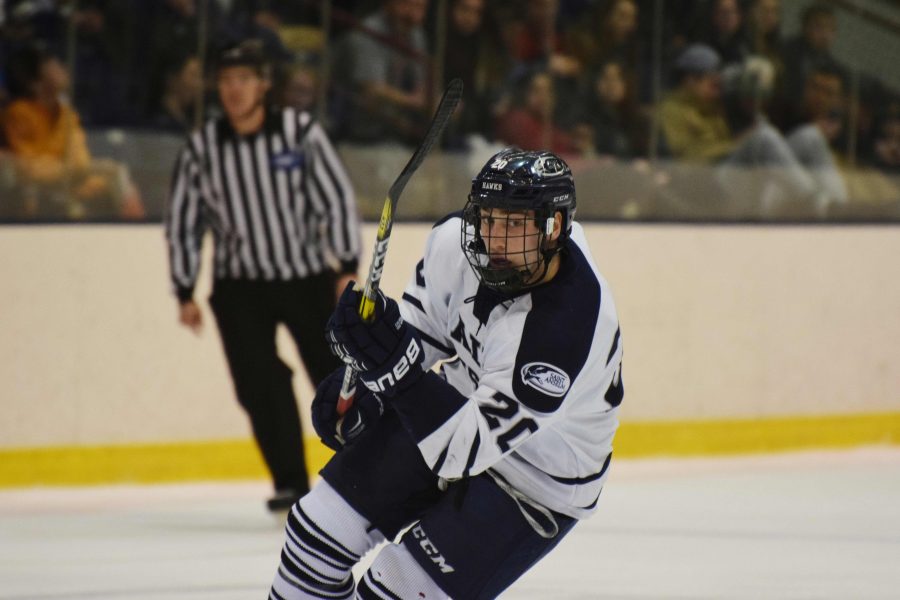 Freshman Trey Aiello on the ice in the NE10 semifinals.

The Saint Anselm men’s hockey season officially came to a close after the top seeded Hawks were upset by the fourth seeded Assumption Greyhounds 4-3 in the Northeast-10 Conference Championship semifinals on Saturday, Feb. 18.

An estimated 681 fans (the second highest attendance at a home Hawk men’s hockey game this season) packed into Sullivan Arena for the playoff matchup. Sophomore Colin Soucy started in the goal for Saint Anselm, and he had a rough go of it, giving up two goals late in the first period and a third less than halfway through the second as the Hawks found themselves down 3-0.

Following Assumption’s third unanswered goal, Hawk head coach Ed Seney made the move to bring in junior goaltender Shane Joyce, who played the remainder of the game for Saint Anselm between the posts.

The Hawk offense began to mount a comeback late in the second, scoring two goals in the last five minutes of the frame. Senior Nick Leonard netted the first one at 15:24 into the period. Freshman Ryan Spillane and senior co-alternate captain Vin D’Amato assisted on the play. Then at 19:39, freshman Trey Aiello scored a power play goal to pull the Hawks within one. Junior Jon Pallotta and sophomore Ryan Loranger assisted on the goal.

Saint Anselm looked to carry the momentum into the third period, however the rally fell short as Assumption scored an insurance goal 8:07 into the final frame. The Hawks made one last attempt at a comeback when junior Jon Pallotta recorded his second point of the game, finding the back of the net at 12:22 into the period. Sophomore Trevor Kacz and junior Justin Longo recorded assists.

In the seven plus minutes of play that followed, Saint Anselm was unable to tie the game before time ran out, as Assumption won by a 4-3 final, knocking the Hawks out of the NE10 playoffs.

Assumption will play Saint Michael’s, who defeated Stonehill 4-1 in the NE10 semifinals, for the conference championship on Feb. 25.

The power play was an area that plagued Saint Anselm all season, as they were only successful at scoring approximately 18 percent of the time when they had a one or two skater advantage. This trend continued into the NE10 semifinals, as the Hawks only scored on one out of six power play opportunities.

They also received a number of penalties in the game. Seven Hawk skaters were sent to the box, including three separate penalties in the crucial closing minutes of the third period following Jon Pallotta’s goal that pulled Saint Anselm within one.

One bright spot for the Hawks was that several players received NE10 recognitions following the conclusion of the regular season.

In addition, head coach Ed Seney was named NE10 Coach of the Year just a few weeks after notching his 200th career victory.

The Hawks concluded the 2016-17 season with a 12-12-2 overall record, and were two goals away from playing in the NE10 Championship game. The 2017-18 squad is scheduled to open their season on Oct. 27 in Sullivan Arena when they host Bryn Athyn College.