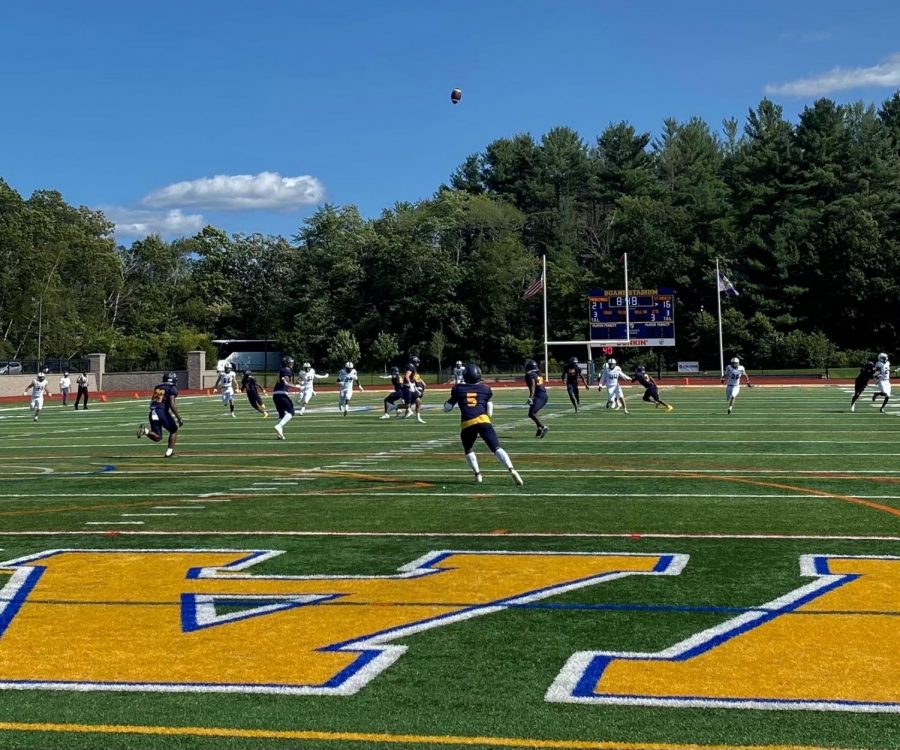 Hawks lose 55-23 against Merrimack College, after a hard fought game.

Welcome back, football! After a year hiatus, Saint Anselm kicked off their 2021 season by hanging tough with Merrimack College for three quarters before finally running out of gas in a 55-23 loss.

The Hawks were faced with a very tough test Saturday September 4, travelling to a hostile environment against a Division 1 program in Merrimack. Saint Anselm has high hopes for this year with head coach Joe Adam leading the team going into his sixth season. Getting back into game mode after missing all of last season due to COVID has been no easy task. In his season preview video on Saint Anselm Hawks, Coach Adam brought up the inexperience of this year’s team.

“We really have two classes that have never played college football before. So getting back into how we practice, how we take the field and the little things that we do, that was part of our focus as we went through the preseason,” Adam said.

But the Hawks showed grit, heart and determination Saturday afternoon. They stuck with Merrimack for three quarters and battled hard the whole way. The Hawks jumped out to a 9-0 lead in the second quarter after a huge pick-six by Ryan Sullivan, a team captain and fifth-year senior. The Hawks kept it close, trailing 14-9 at halftime. In the third quarter, Junior running back, JC King, punched the ball into the endzone from the 2 yard line. At the end of the third quarter the Hawks were still within striking distance, trailing 28-16. Merrimack pulled away in the fourth quarter, scoring 27. In the fourth, the Hawks struck for a final time when sophomore quarterback, Drew Willoughby, found junior wide receiver, Anthony Brown, in the endzone for a 21-yard touchdown. Merrimack College outlasted Saint Anselm College 55-23. Saint Anselm looks to bounce back away at Southern Connecticut State University on September 17.

Despite the loss, there are a lot of positives for the Hawks to look forward to this upcoming season. According to the preseason coaches’ poll, the Hawks are predicted to finish sixth in a very tough and talented NE10 division. That would be their highest finish since the 2015 season.

One of the keys to this team’s potential success is the closely knit locker room. Offensive lineman Tom Cavanagh, who’s in the Master’s program, said, “I’ve learned that there’s a lot of confidence, toughness, and resiliency from this group of guys. Everyone is unified with one goal in mind. There’s an abundance of positive energy.”

The Saint Anselm Football team brings in a huge class of nearly 40 freshmen. The underclassmen guys are hungry to make an impact. They have lots of talent and potential, but on a team with so much youth, the experienced players are more important than ever. The leadership of Coach Adam and the Hawks’ veteran players will be crucial for this team’s success. Including 5th-year and Master’s Program players, the team includes over 20 seniors.

Cavanagh mentioned, “Leadership is of massive importance. A lot of these guys have not had the experience of playing a college football game because of COVID. It’s a young team, and it’s important for the vets to set the example.” The team will feed off the energy of the more experienced guys throughout the season.

It’s also important on a football team for everyone to do their part.

“We are looking to be the best at doing our job on every play. Everyone strives to do their 1/11th every play,” Cavanagh said. He also spoke on the many roles on this team, “There are rah-rah guys and there are tame leaders on this team. We have a great mix of both. Everyone keeps morale high. When a guy makes a mistake, he’s got at least 10 guys telling him to keep his head up and move on to the next play.”

Football has a long, mentally draining and physically grinding season. And so, having a strong mindset is an essential building block. It’s also a game where you have to adapt and overcome.

“‘Don’t let the past play affect the next play’ is a motto we follow,” Cavanagh said.

This year’s Saint Anselm Football team is a special group, and they come in with high expectations. “Our goals are pretty simple. We expect to compete in every game. We want to win all our home games. We want to win the NE10 conference,” Coach Adam said on Saint Anselm Hawks.