The Lord of the Rings: The Return of the GOAT (aka Tom Brady) 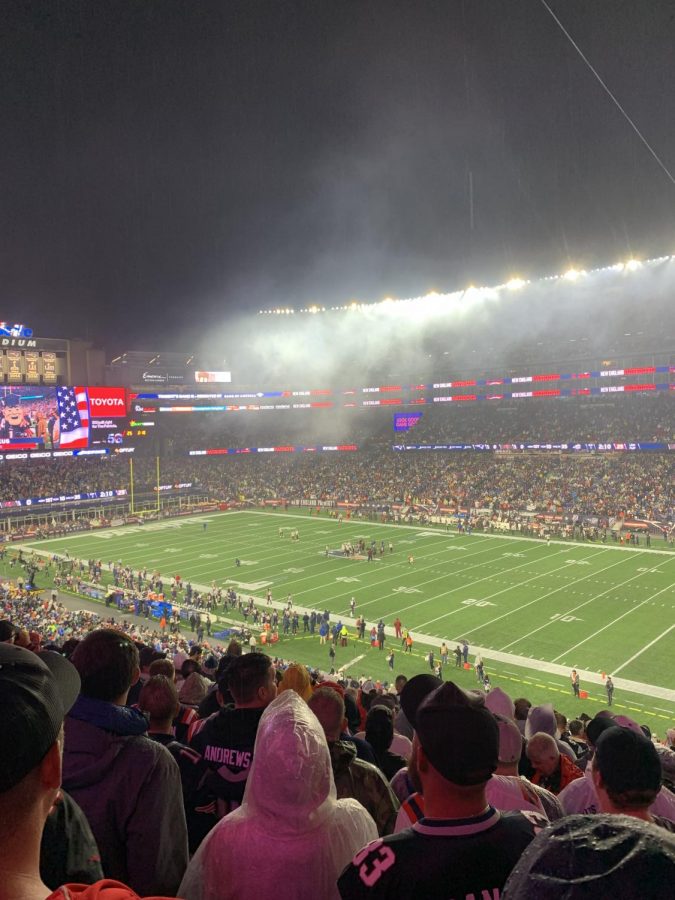 In 2000, the New England Patriots selected Tom Brady with the 199th pick in the 6th round of the NFL draft. Over the course of the next 20 seasons, Brady would forge his legacy as the greatest quarterback of all time with the Patriots, winning a record 6 Super Bowls, 4 Super Bowl MVPs, 3 regular season MVPs, and becoming the franchise leader in wins, touchdowns, and yards. This run of dominance with head coach Bill Belichick came to an end in March of 2020, when Brady signed with the Tampa Bay Buccaneers. On Sunday, October 3rd, the GOAT came back to Foxboro for a week 4 game against New England.

There was no way to oversell this game. It was quite literally the biggest, most anticipated regular season game in NFL history. All week, it had been the major topic on any sports show regionally and nationally. NBC’s Today Show and ESPN’s Sunday NFL Countdown both did live shows from Gillette Stadium on October 3rd. Both teams faced questions that were seemingly only about the Brady vs. Belichick matchup, to the annoyance of players like Matt Judson, who said to ESPNs Mike Reiss, “Bro, he’s the next quarterback we got to play…it’s not like we’re afraid of what Tom Brady can do.”

This game was the hottest ticket in town. The average ticket price was over $1,000, which is second all-time for a Boston sports game, behind only Game 7 of the 2019 Stanley Cup Final (Vivid Seats). According to NBC, 28.5 million TVs tuned into the game, the highest total for a Sunday night matchup since 2012. In Providence, a whopping 45% of TVs were watching. When Brady walked out of the tunnel on Sunday night, it was otherworldly. It was as if God himself had returned, a childhood hero, an icon for Bostonians young and old. The Foxboro faithful gave him a standing ovation when he came out for warmups and when the Buccaneers came as a team, but still maintained their loyalty by booing the GOAT when he came on for Tampa’s initial drive. Brady may be on another team now, but he will always be welcomed and revered by New England football fans.

Lost in all of the hooplah of the return was the Patriots current quarterback was rookie Mac Jones out of Alabama. Jones has impressed so far, despite inconsistent play from his receivers and his offensive line. But this game was his biggest test yet. Jones is no stranger to big games, coming from the vaunted Alabama Crimson Tide. But this game was a whole new level. He is the heir apparent, facing the old master himself. It’s Luke Skywalker vs Darth Vader on Bespin. While Jones has a long career ahead of him, this was a chance for his coming out party on national TV when everyone else is talking about the other quarterback. Safe to say, Jones showed up. Going 31/40 for 275 yards and 2 touchdowns, the rookie made his presence felt on the field, almost driving New England down for a game winning field goal, before Nick Folk missed a questionable 56 yarder with a minute left.

As far as the game itself, it was a classic. The Patriots built up a halftime lead after Jones hit Hunter Henry for a touchdown, and the defense had their best game of the season by making Brady uncomfortable in the pocket and limiting the high-powered Bucs to only 19 points. However, it was still enough, as Brady did as Brady does, driving Tampa for a game winning field goal that was unmatched by Jones, giving the Bucs a 19-17 victory in the rain.

After the game, Brady had conversations on the field with many of his New England friends, including Josh McDaniels and Devin McCourty. Reports indicate he and Patriots coach Bill Belichick had a 20 minute conversation in the Tampa locker room after, away from the lights and cameras. Safe to say, Brady’s homecoming was emotional, and he expressed his desire to be involved in the area once he finally (if ever) retires.

Tom Brady left New England, and his train kept rolling. On Sunday night, that train rolled back into Station #1 for his NFL career. On a stormy and emotional night, Brady delivered a victory against his former team. The Patriots dropped to 1-3, but anyone who watched the game should feel hopeful. Tom E. Curran ‘91 of NBC Sports Boston wrote about how the door is finally closed on Brady. He is truly gone, and that’s okay. The future is bright in the hands of Mac Jones. But New England will always love and miss their prodigal son, the Greatest of all time, Tom Brady.