Women’s lacrosse finishes season with high hopes for next year 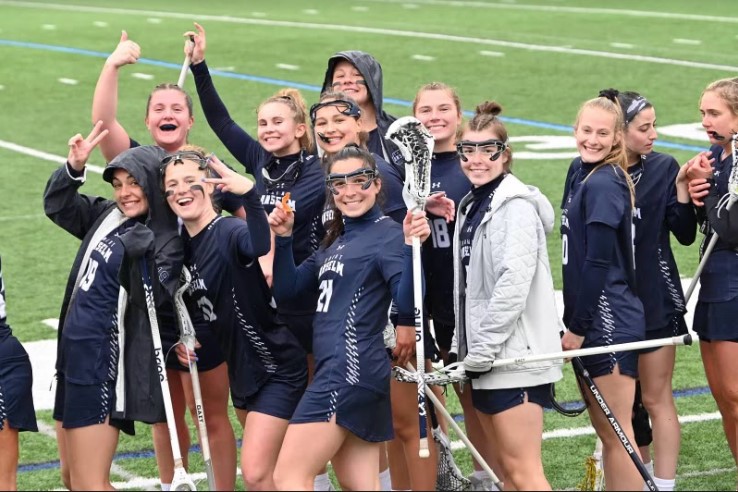 Women’s lacrosse finishes the season 7-9 and 5-8 in the Northeast-10 conference.

On Saturday, April 30, 2022, The Saint Anselm Women’s Lacrosse team took the three hour ride to Albany, New York, where they would close out their regular season facing Northeast-10 conference opponent, The College of Saint Rose. The Hawks entered the contest at 7-8, looking to finish the season with a .500 record, after a three game skid coming down to the wire.

Kicking off just after 5 PM, the Hawks looked to have a quick start to begin the nightcap. Not long into the game, Senior Taylor Cobain found the twine for the Hawks. However, it would not be long until Saint Rose came striking back, finding the back of the net themselves, just a little over three minutes later. However, the quick response by Saint Rose did not fall onto deaf ears. Once Again, Cobain was able to sneak the ball into the goal, with 7:01 remaining in the first quarter of play. In short procession, Senior Jenna Balboni extended the Hawks lead to two as time dwindled in the first. Saint Rose would score once more in the quarter, narrowing the lead back down to one as the game moved into the second.

Saint Rose came out firing to start the second, quickly evening the score at three a piece. However, Balboni would yet again come out of the woodwork to find the back of the net. Twenty-four seconds later, Sophomore Jess Sullivan would also pocket one into the Saint Rose goal, giving the Hawks a two goal advantage yet again. Sophomore Ali Ferulo would follow up by scoring twice later in the quarter. Sullivan would score after her, recording her second of the game. Entering the half, the Hawks Led Saint Rose by two with a score of 8-6.

The third quarter began with a third goal from Ali Ferulo. Jess Sullivan would also score again during the third. Saint Rose, however, would score three within the quarter. Leading into the final quarter of play, the Hawks held on to a one goal lead, with a score of 10-9.

The fourth quarter would go back and forth, without either team recording a goal until nearly five minutes remaining, with the Hawks down a player due to a penalty. But Saint Rose found the back of the net three times, taking the lead with little time remaining.  Cobain scored again, tying the game. As regulation ran out on the final regular season game, the score was deadlocked at 12.

However, Saint Rose would score the game winning goal in the first overtime, ending the Hawks’ season with a loss.

While the final game ended in a loss, the season mostly was a success for the Hawks. The Hawks were in the positive in goal differential, outsourcing opponents at a margin of 200 to 183.

Jenna Balboni held a team high in points, recording 40 goals and 21 assists for the 2022 campaign. Junior Lexi Palmisano led the team in goals, scoring 45 times on the year. Jess Sullivan and Ali Ferulo led the underclassmen in scoring, recording 34 and 29 goals respectively.

One of the highlights to the 2022 year was held by Senior Annie Richards. Richards recorded her 100th career assist, becoming the first player in Saint Anselm Women’s lacrosse history to reach the notable mark.

Overall the Hawks finished the season with a record of 7-9, finishing 5-8 in the Northeast-10 Conference. At their highest ranking during the season, the Hawks were voted to be the 19th best team in Division 2 women’s lacrosse. Overall, a strong season from the Hawks, showing a lot to be excited for in years ahead.